“The Getaway” by Red Hot Chili Peppers: Get Excited!

“The Getaway” is Red Hot Chili Peppers’ latest example of their well-deserved musical reputation for catchy beats. The band has been at the forefront of alternative music ever since their 1991 album Blood Sugar Sex Magik propelled them to critical and commercial achievement. They found further success with their albums Californication (1999) and Stadium Arcadium (2006), two of their most famous works. Their musical style has changed quite a bit over the years. Initially recognized by a blend of funk rock and spoken verse and currently identified by a mixture of alternative rock and melodic chorus, Red Hot Chili Peppers have proven their ability to create diverse and inventive music.

Red Hot Chili Peppers are set to release their eleventh studio album The Getaway through Warner Bros. on June 17th, 2016. Their tenth album, I’m With You, was released in 2011. It’s been a while since new Chili Peppers music has dominated the airwaves! The band released the album’s first single “Dark Necessities” on May 5th, 2016. It became their twenty-fifth Top 10 single on the Billboard charts and their thirtieth song to chart inside the chart’s Top 20. Clearly the band is no stranger to the limelight!

Red Hot Chili Peppers released the title track to The Getaway, titled “The Getaway”, on May 26th, 2016 to great excitement. The song opens with a rhythmic beatbox tune, which is quickly accompanied by bassist Flea’s signature pulsing bassline. Lead vocalist Anthony Kiedis creates a melodic synergy with guitarist Josh Klinghoffer. Soon after this musical blend, the song’s pace picks up into a pleasant beat. “The Getaway” sounds like a classic Chili Peppers song, yet it successfully fits into the chill and laid-back personality of modern alternative radio.

Although “The Getaway” isn’t a single, it was made available to purchase on May 27th along with a free download for fans who have pre-ordered the new album. If you haven’t heard “The Getaway” yet, check it out on YouTube below! If you like what you hear, don’t forget to check out “Dark Necessities” as well, also included below. Red Hot Chili Peppers is not one to disappoint when it comes to releasing awesome bassline-driven beats. 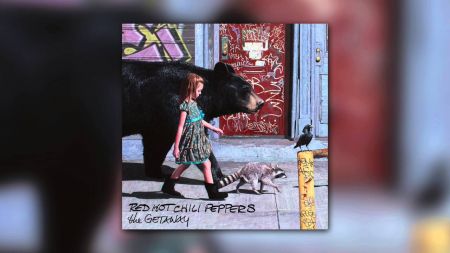