Hardships not only test you, but they also reveal who your actual friends are. So when Jake, a 2-year-old Golden Retriever, lost his vision, it was for his roommate Addie to step up and help him get accustomed to his new life. And she did. During the last couple of years, Addie has proved herself time and time again to be both a loyal guide and companion, absolutely worthy of being called the goodest of the good girls.

“We got Jake after our previous Golden Molly passed away and Addie came into our lives after our Golden Wrigley died. Jake was very sad after his buddy was gone and we knew he needed a sibling,” their owner Kim told Rare Norm.

“Jake follows Addie’s sound and smell. After Jake’s surgery, Addie wore a little bell on her collar for a while until he got used to tracking her on his own”

Jake’s problems began when he turned 2. “We noticed an issue with his eyes and eventually found that he was no longer producing tears”

“Over the subsequent months, in spite of trying every medication recommended by our vet’s eye specialist as well as multiple surgeries, his eyes steadily deteriorated”

“We were faced with a painful decision: Have Jake’s eyes removed or have him put to sleep”

“Both options seemed so cruel, and especially for a dog who’d already been through so much”

“However, over the next several days, we were contacted by a number of owners of blind dogs”

“[They] encouraged us about the resiliency of their dogs after losing their sight going on to live normal, happy lives”

“Our vet also counseled us that, to a dog, sight is actually number 3 on their list of senses, as both smell and hearing are more important to them”

“With that information in mind, we decided to move forward with having Jake’s eyes removed”

“Immediately after waking up from surgery, our vet said that Jake began wagging his tail”

“His months of pain were over, and he was letting us know!”

“While he had an adjustment period as he acclimated to his new life, he continually surprised us with the ease with which he seemed to approach his circumstances”

“He still bumps into things now and then, but he also navigates the house and our neighborhood walks with surprising ease. And thankfully, his playful nature has returned!”

“We’re so happy we made the choice we did, and so grateful for the many people who encouraged us to do so. Jake reminds us every day that his life still holds great purpose and value in spite of all his challenges,” Kim said. “[He] has a laid back surfer dude type personality. He sleeps on his back with his feet up in the air. Addie, on the other hand, is more of a cuddler. She loves being everywhere we are and is always ready to share kisses.”

When they’re not sightseeing or going on adventures, Jake and Addie live a normal pup life. Their typical day usually starts with a morning walk and breakfast. “We always have a little nap after breakfast. Next is playtime! We love this time of year where we can play outside together and chase squirrels!” 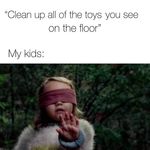