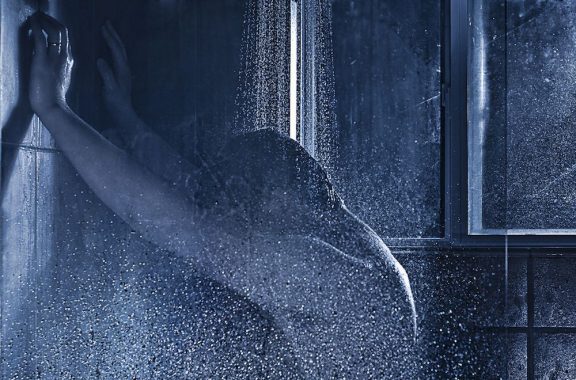 “Motherfucker, if only I could have been there,” Michael grumbled as he slid his shirt over his head, removing his clothes. Turning on the shower, he moved to the sink and splashed cold water over his face. He stared past his reflection in the mirror. “Get it together, Mike,” he mockingly said aloud before stepping into the now steaming shower. Embracing every nerve as the water streamed over him, he pressed his face to the shower head. Suddenly a foreign noise broke his trance as he craned his neck towards the disturbance. At first he figured it was a neighbor returning home, but peeking his head out further to investigate, he saw the light under the door go out.

Throughout Michael’s life he had reason to remain on alert so paranoia was an everyday factor. Even if the marijuana was playing with him, he learned at an early age to trust that gnawing little voice called intuition. Keeping the shower on, Michael carefully stepped onto the soft rug while simultaneously drying off. He took a few steps towards the door to listen, positioning himself behind the door which opened towards him. He heard some quiet, indistinct chatter as he looked to the door handle slowly turning, the door cracked open. With his heart now racing a million miles a minute, an intense heat rushed over him as time came to a crawl. Michael then saw the nose of a black barrel poke its head out from behind the door. Imaging the figure holding the gun behind the door, Michael yanked the door open with his left hand while grabbing a handful of a leather coat with his right and pulling down the startled stranger with all his might.

Michael pulled the man inside the bathroom, twisting his falling body beneath him as his eyes fixated on the gun. The stunned intruder fell to the ground hitting his head on the shower step as the heavy handgun crashed onto the tile floor. Jumping to his feet, Michael threw his weight against the bathroom door to keep the other assailant from entering. Turning his attention to the dazed man on the ground, Michael punted him in the face. Holding onto the towel rack for support and now seeing red, he stomped the now unconscious man until the door burst open and a big, burly man awkwardly fell through head first.

Michael and the second intruder tripped over the lifeless mass lying on the floor and came crashing down onto the wet shower floor as it the shower continued to run. While making his clumsy, forced entry, the light switch must’ve been hit as the bathroom went pitch black like the rest of the apartment. After tumbling to the ground with a thud, Michael moved his hands to pick himself up and miraculously felt his palm press against what was undoubtedly the barrel of a gun. With the large figure coming to his senses next to him, Michael desperately reached for the metal piece. With the gun securely in both hands, Michael whipped his wet, naked body around and squeezed off a dozen shots into the two men lying beside him. With the gun going off, lighting up the room like a roman candle, Michael could see that in the melee he hit his intended targets. As the smell of sulfur consumed the room and with his ears ringing, Michael sat back panting, the darkness enveloped him.