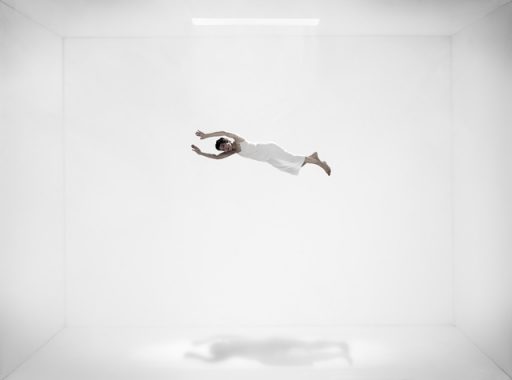 Concentrating on breathing out slowly, Michael felt at his most primal, but he still wasn’t sure if he was alive or dead. It was total darkness as the ringing in his ears began to subside. For the moment, Michael felt wonderful, remaining perfectly still in the silence, the sensation was akin to being in a womb. His senses were alive like never before and he felt an intense connection to everything around him. He had never been more aware, yet he felt almost paralyzed, just floating motionless in the darkness. Suddenly the distant sound of bouncing keys and walkie-talkies broke the strange peacefulness. Plunged back to reality, Michael knew undoubtedly what those sounds were – cops.

Now sitting in a solitary cell, the piercing white light and electrical buzzing grew increasingly annoying. Michael had enough experience with the police to be wise to their elementary interrogation tactics. Being cooped up alone with his thoughts was not going to rile him up anymore and everyone in the station should know that by now. He didn’t immediately recognize the cops, who picked him up, but this was MPD (the Milwaukee Police Department) and after running his name, he figured everyone could cut the bullshit.

After transporting him to the station and tossing him into the holding cell, no one had bothered to speak to him since the apartment. Not that Michael had much to say to the rookie street cops, but he knew that he would have to make a statement soon and he wanted to get on with it. He heard keys jingling as the lock turned and a fat faced, white haired man peeked in, “Night sergeant wants an interview,” he barked.

It had been years since Michael was back in Milwaukee. He hadn’t seen a familiar face in what felt like ages. “Thought we finally got rid of you,” a tall man, with a neat white button up and dark blue slacks strolled in closing the door behind him. Michael knew exactly who this olive complexioned man with the trimmed mustache was.

“Yeah, feeling’s mutual,” Michael snorted, studying the man as he sat down.

The man’s name was John Demo, or Big Casino/Cas, as his dad referred to him since their youthful days growing up. The nickname was an ode to his penchant for gambling and his size that made anyone think twice about failing to pay a bet. In their late teens, John chose the blue uniform while Michael’s dad stayed the course of a career criminal.

“So, I gotta admit, helluva a way to announce your homecoming. The boys said you made quite the mess back at the apartment.” John ventured.

“Are they dead?” Michael interrupted.

“Who?” the sergeant said raising the pitch of his voice.

“Really, we have to do this song and dance, “ Michael said. “All I know is two guys broke into my place while I was in the shower, and I managed to get the jump on them as they tried to sneak up on me.”

“And I’m supposed to believe who have no idea who broke into your place, is that right?!” John shot back

“It’s not like I invited them over for dinner.” Michael rebuffed.

“I’m an open book,” Michael said shifting himself in the seat. “

Three years ago it’s like you fell off the face of the Earth.” John began. “I dropped some flowers off at the hospital for your mom by the way. Either you pulled a Houdini or you didn’t make it back for the service.”

“I never met a cop that I liked, but if there was such thing as a decent one, you had my vote. Michael offered. Let’s just get back to why we’re here, Cas.”

“Same page, Mike. I’ll cut to the chase. While I know you’re tough as nails, I let you leave here tonight and you won’t make it a week. I’ve got a proposition.”

“Yeah, right. Tell me who tried to kill me.” Michael said kicking himself back in the chair.

“Those guys were connected,” John gave up. “Here, I’ll show you.”