Holoportation is a new fundamental technology that has the potential to totally change how people will communicate in the future. holoportation allows virtual teleportation of a person from one site to another in real-time. When two people in different houses wear the devices, they can see each other in full 3D in real-time, interact and communicate as if they are co-present. The devices allow people to do things like they were in the same place yet they are distances apart.

To make holoportation work, the innovator had to make a new type of 3D capture technology. Basically the new 3D system consists of different cameras positioned to capture live events at different angles. The collected data from these video cameras fuse together to create a temporal consistent model. The camera recording the first person have a whole length tracking system attached, making it possible to tape the 3D model and composite them in real-time. This allows for greater length of restructuring of the data, texture them, compress them and send them to the other side.

This technology has proven to have the potential to bring the families in different cities together. The holoportation technology commercialized, helps replace other technologies like teleconferencing. This technology is superior because the communicating subjects can feel like they are actually in the same place and having a one on one interaction. The holoportation also allows the user to record and play back the entire session. If the user wears the device later, it brings back magical life and memories as if it was real-time, could even rival dreaming in the near future. Holoportation is the next big thing, and then new defeat long distance troubles. 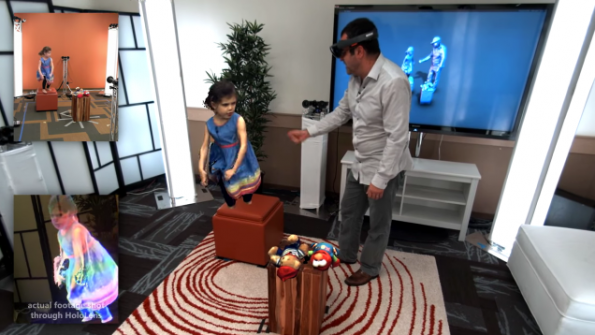