It’s Always Sunny in Philadelphia is coming back to the small screen for its thirteenth (13th!) season next week, and FX just dropped a new trailer teasing the gang’s upcoming antics. There’s a lot going on in this trailer, so between my excitement for the return of both IASIP and the NFL (lightly salted with Hard Knocks), breaking down the trailer play-by-play Tony Romo style feels like the right way to go.

The fact that the trailer begins with a sexual harassment training session swings the door wide open. In what sort of situation did the gang find themselves that required attendance in this training? In the twelve seasons prior, not a single one voluntarily found themselves in a meeting such as this. Community service? Court ordered. Frank’s intervention? Charlie missed playing Nightcrawlers. Even when they go to see Dee’s therapist it’s only to try and decide who should do the dishes. No, this sexual harassment training was deemed necessary by an outside source.

Let’s jump right into the most noticeable part of the trailer: Mac’s rubber Dennis doll. It’s weird. It’s creepy. It’s got homosexual undertones that have been trailing Mac throughout the entire series. At the end of season twelve, Dennis (played by Glenn Howerton) chooses to leave the gang and go be with his one-night stand and his newly-revealed son in North Dakota. He’s symbolically terminated with the rocket launching of his status defining Range Rover, and rumors of his return have been swirling ever since. There were reports that Howerton (whose NBC show AP Bio was renewed for a second season) would return to some extent, but there’s no sign of him in the trailer except for his, um, replacement. 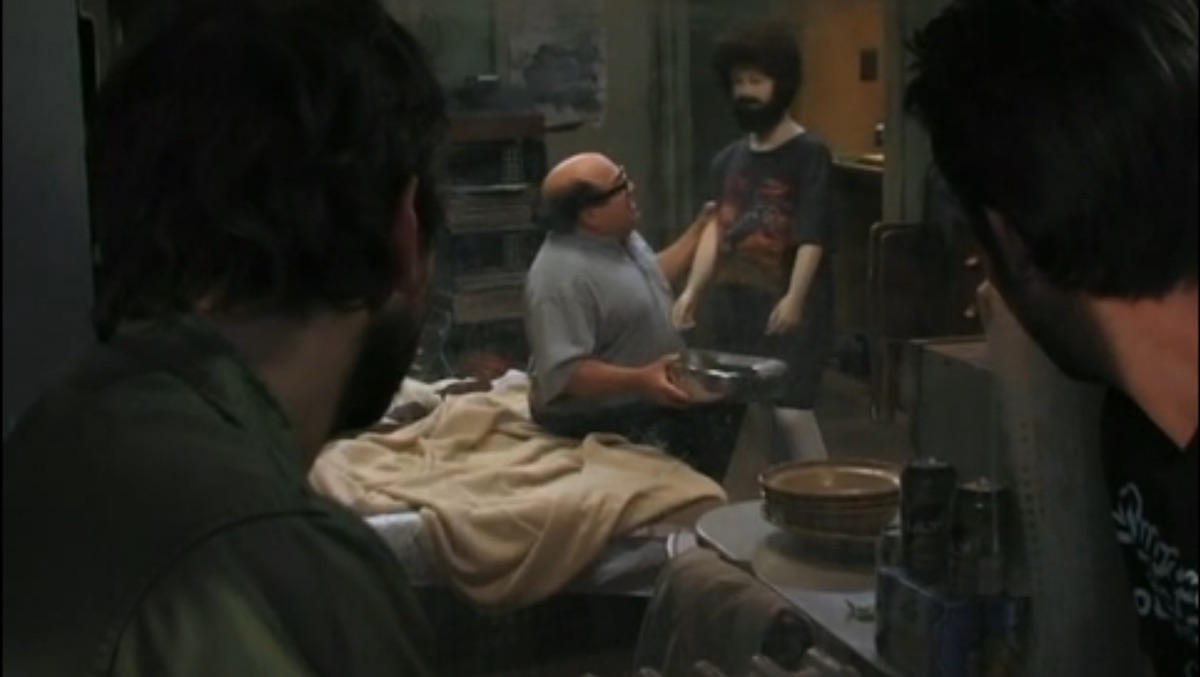 As has been happening over the last couple of seasons, the writers and creators have been revisiting some of the gang’s previous antics, and the new trailer unleashes a few more callbacks. In the season four two-parter “Mac and Charlie Die,” Frank’s emotional process in mourning Charlie’s departure involves dressing up a bearded mannequin and recreating typical roommate arguments like whose turn it is to take out the urine bucket. In the trailer, Mac takes the twisted fill-in a step further with his gape-mouthed pseudo-Dennis.

The new season also boasts a re-creation of “The Gang Beats Boggs” in an apparent all-female version of the attempt. Airplane seating and white tees for scoring are obviously apparent with the added consumption of wine to the mix. Mrs. Kelly and Mrs. Mac even make an appearance on a baseball field, presumably to try and bat .300 before going back to Philly to get chicken.

Throughout the entire series, Mac’s always been egotistical when it comes to fitness and, as he so eloquently puts it, cultivating mass. The nine-second mark shows a fully jacked Mac, shirtless under the duster, reminiscent of a move Dennis pulled in an earlier season for which Mac expressed disgust. It’s good to know the duster is still getting some play as the series marches onward.

For one reason or another, there’s a shout-out to Seinfeld at the thirty-second mark when Charlie pops through the door with clothes and hair straight from Michael Richards himself. Thankfully there’s social media, and popular Twitter account Seinfeld Current Day took notice.

There were rumors that a new actor had been added to the mix, and the trailer confirms that Mindy Kaling is indeed part of season thirteen. While little is known about her character or how involved with the gang she’ll be, the fact that she’s present when Mac busts out New Dennis means she’s got some pull. It’s almost a full circle feeling, given that Howerton played a recurring character on Kaling’s The Mindy Project.

Throughout its run, IASIP puts enough in the trailer where fans are left wondering just how in the world the gang finds themselves in that situation, and nearly always delivers on the insanity. Here’s hoping lucky number thirteen is no different.