Meet the new kid on the block

Released in the arcades back in 1988 and eventually finding its way to home computers, Atomic Robo-Kid has players pilot a cutesy mech character against throngs of deadly enemies, utilising a selection of varied weaponry to stay alive and reach each of the stage’s domineering boss characters, the “Governors”, whose epic size and scale blew us away back in the day.

Not only did Atomic Robo-Kid have great bosses, but it and great graphics and effects, branching paths, neat music and even duels between fellow Robo-Kids. It was quite a step-up back in ’88, though I’m yet to see whether the gameplay holds up under modern scrutiny. If you want to try out a slice of retro shmup history, then Atomic Robo-Kid is available now on Nintendo Switch, priced at around $8. 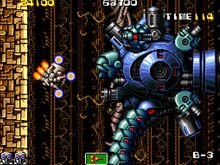