Doesn’t break the mold, just dusts it off for more

So let’s talk about alchemy, the magical art of turning one thing into another, or usually, crap into gold. For Potter fanboys, Fantastic Beasts is another welcome view into Rowling’s still magical mind. That’s me, Potter fanboy, so half of me is sold on this new series even if I know it’s a pure scam. The second I got the email, letting me know that J.K. Rowling needed a few bucks from each of her readers to make her next movie, and could I please just send my bank account number, routing number, DOB and social security number, I was in. I sent it all, willingly, as I’ve never let go of hope that she’d revisit the world she swore off after book 7. So what if it’s a movie and not based off another real, full-length story. It’s all butterbeer to me.

For everyone else, you may get a knee-jerk reaction to Fantastic Beasts: The Crimes of Grindewald as just Rowling’s literary leftovers. The Potter residue. Can this series turn those leftovers into gold? Or is it, like alchemy, a sham, designed to cash in at the box office?

Warner Bros. is aching to create a cinematic universe. Know this. Thus far, the struggle has been real. Their DC Cinematic Universe Line has not been the wild success like the one created by their far more talented and prettier cousin, Marvel. That’s not to say it’s not a valuable property, and that’s not to say they don’t have other valuable properties to try to market to moviegoers. Enter Harry Potter.

With the final film based on J.K. Rowling’s cornerstone series of seven books now nine years in the past, it was necessary to find more material. They chose Rowling’s Potter accompaniment, Fantastic Beasts & Where to Find Them. 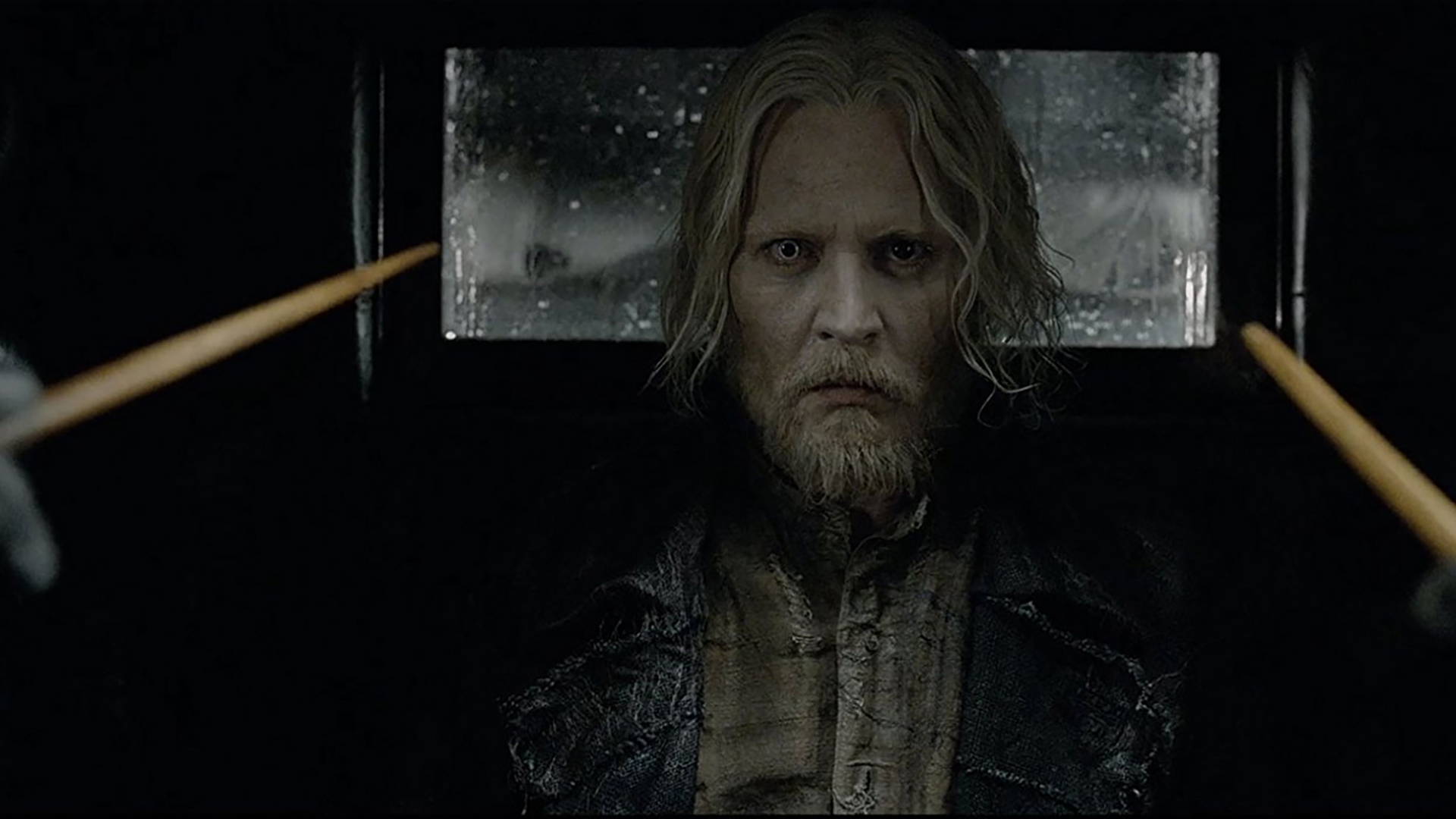 The first FB film, released in 2016, was a massive success, thus validating the expansion of the cinematic Potterverse. With the films being written by Rowling herself, and continuing to be directed by long-time Potterverse director David Yates, it seems a sound formula. There’s little doubt that it will be a hit at the box office, hence why three more Fantastic Beasts sequels have been announced for release through 2024, essentially taking a closed franchise and extending its lifespan 15 years, as if by alchemy. That’s long enough for Rowling to fully revisit her magical world in book form, or for Warner Bros. to reboot the original film series—something that’s been done on much shorter timelines.

In Crimes Grindewald, Yates, with the ownership of a director who’s now directed the last six Potter films, does a fantastic job of showing the world that he’s built: his interpretation of that which Rowling made. It’s wonderful, especially as we get back to Europe for this go around, allowing us to revisit some of our favorite Potter Haunts of old. There are familiar creatures, and new, at once satiating Potter devotees with wizard callbacks and the film’s titular magizoological nature. Familiar wizard names, settings, and themes abound even more than in the first Fantastic Beasts. The set pieces are incredible, and look like they spared no expense–with a production of $200 million, they likely didn’t. 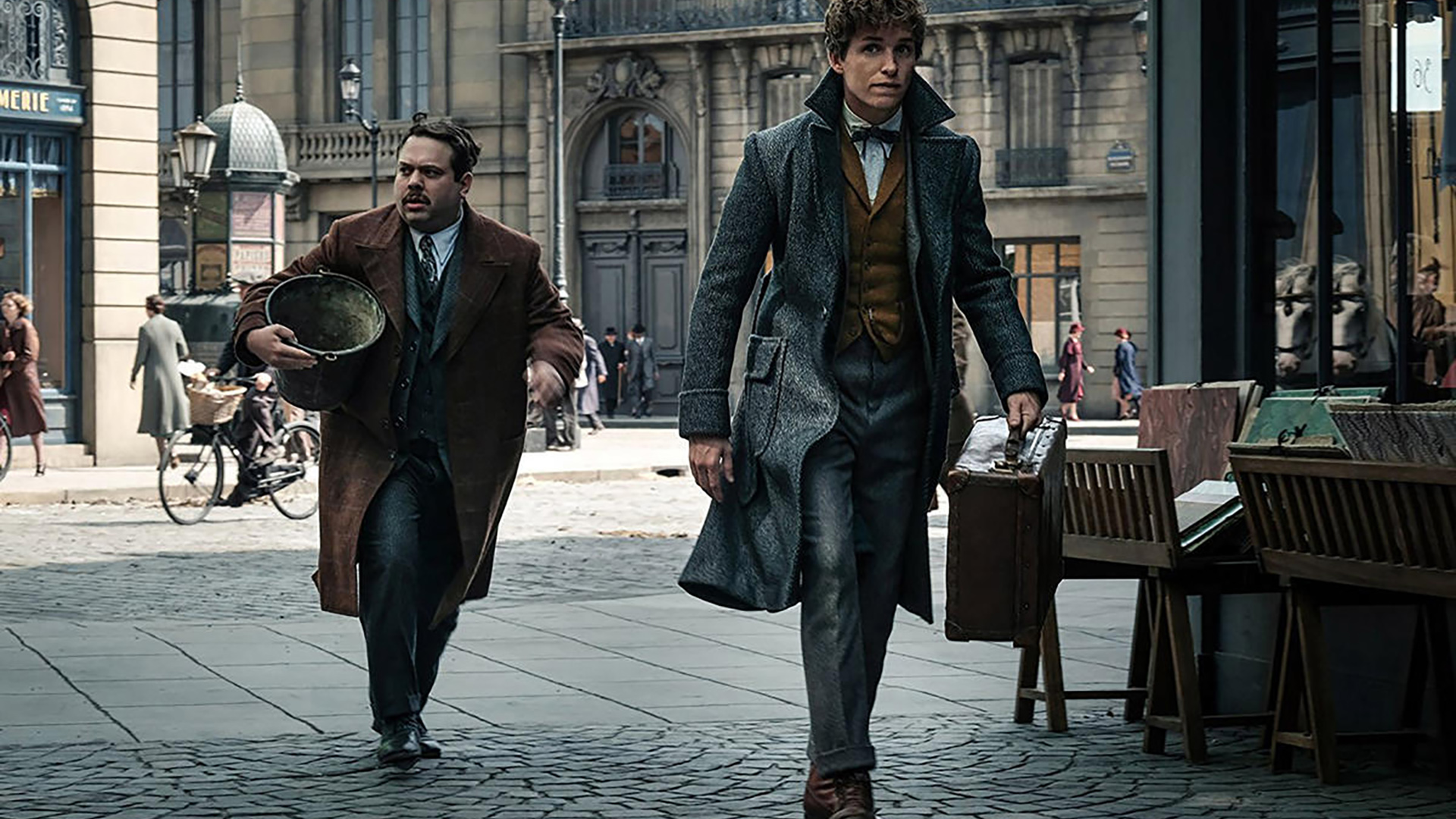 What’s less present is the fun relationship building that happened in the original FB. The gang’s all back with Newt Scamaneder (Eddie Redmayne), Jacob Kowalski (Dan Fogler), Tina Goldstein (Katherine Watersron) and Queenie Goldstein (Alison Sudol) yet, what made the original fun was the dynamics between the four is missing. Watching muggle Jacob be pulled through the magical adventure from an outsider’s perspective infused fresh energy into the story in a welcome way. It made it something new, not just a retelling, and that’s gone here.

This chapter, what with its focus on demonstrating just how evil Grindewald and his followers are, feels more like a retelling. It’s just “the good wizards must unite to stand up against the bad wizards or everyone will pay, including the poor magicless muggles” story again. To be clear, there’s no time to focus on the central relationships from the first film, so much so that when Queenie says, “Let’s find my sister and get the gang back together—it will be just like old times,” you laugh when the movie ends and you realize it was nothing like old times. There are so many disparate plot-lines being created and force-fed to you that you may feel you’ve taken a turn down Knockturn Alley when you thought you were in Diagon.

It’s understandable. Yates (and Rowling) are attempting to create the same narrative drive and emotional resonance for these heroes and villains that she did with 3,400 pages in the original series. It’s an impossible ask, and really, I don’t think the average audience member will have that expectation. 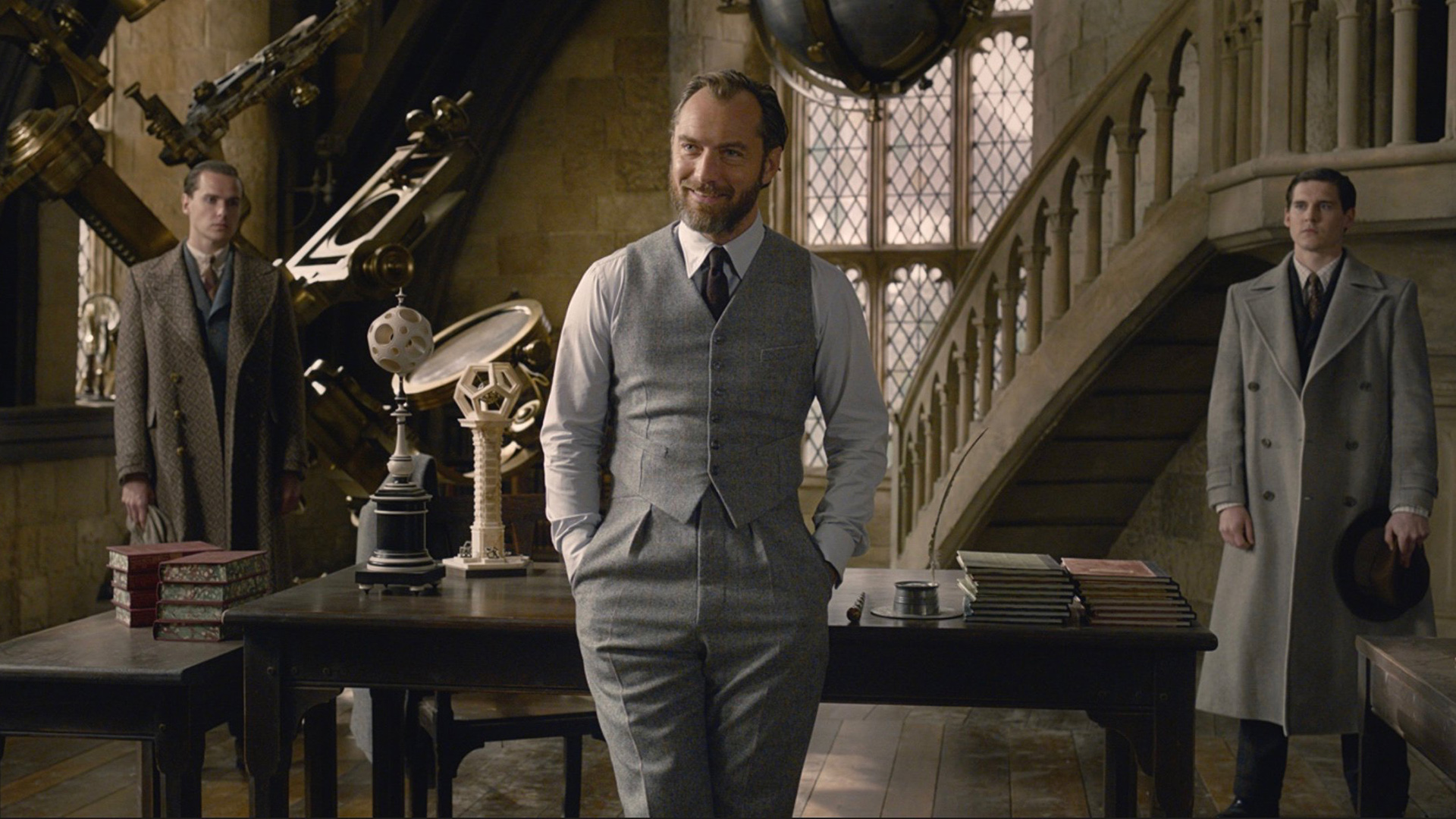 At the same time, I expect one or two audience members less familiar with the Potterverse might find themselves lost once or twice as yet another character is introduced with a weight of gravitas in no way delivered upon. The backstories and mysteries seem contrived, especially when characters suddenly reveal they knew the missing details all along, but neglected to mention it. There’s one big reveal that seems to be outside the Potterverse canon, but it’s unclear if it’s a red herring, something that will remain unique to the films, or a real new detail that fanboys can tweet at each other over.

Oh and I nearly forgot to mention: Dumbledore is back. Of course, we knew this and it’s not spoiler territory. This younger, more dapper-dressed Dumbledore, is played by first time Potterverse player and longtime Brit, Jude Law. Law’s great here. He makes a young Dumbledore feel very much like a youthful precursor to those who’ve come before. He might not do very much, but at least he’s been resurrected to hit hard when the moment comes somewhere in the next three movies. 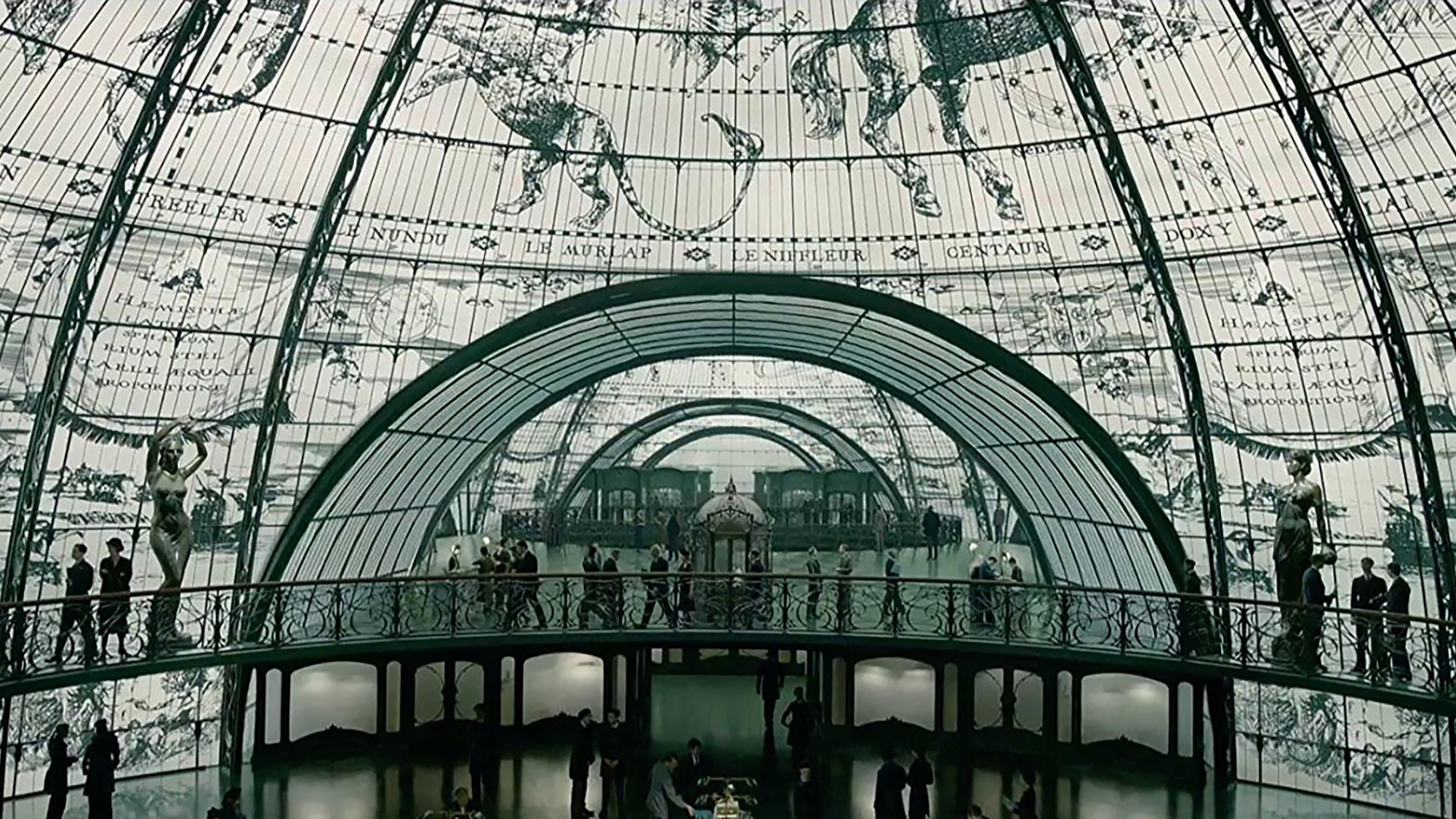 Should we talk about Johny Depp’s Grindewald? Probably. It feels like a classic case of bad guys must suffer from physical abnormalities or just plain ugliness to be bad. It’s what signals to the audience that they’re the bad one, only I thought we had moved past this dated device years and years ago. Sure, some of Grindewald’s hunch-wizards are pretty enough, but he falls convincingly into the Voldemort mold, and I, for one, would have welcomed something on this front that differentiated this new Potter installment from the old, especially in the villain department. If you’re going to go deeper into the magical world, do it for real. Please us with callbacks, but also please us with originality. Grindewald, despite having some role in the original story, was largely a blank canvas. Yet, despite harnessing Depp, a man known to portray unique characters with gusto, we get a non-remarkable villain. Or perhaps Depp’s the problem, perhaps it’s his penchant for portraying the unique partly through appearance that hinders this. Mostly, I think it’s both.

In this case, while audiences will turn out, and largely love it, I think The Crimes of Grindewald could just as easily be a reference to the crimes done against this film by the creative minds behind it. Instead of risking big, they risked little, providing formulaic derivative that doesn’t break the mold, merely dusts it off for another round.

Fantastic Beasts: The Crimes of Grindelwald reviewed by Rick Lash

Slightly above average or simply inoffensive. Fans of the genre should enjoy it a bit, but a fair few will be left unfulfilled.
How we score:  The destructoid reviews guide