I love this record, baby, but I can’t see straight anymore

Can you dance? Although it’s been a real long time since I personally tripped the light fantastic, I was pretty good at the old soft-shoe shuffle. I guess that’s why I’m good on bass (the instrument, not the fish). I’m quite capable of keeping time and holding rhythm. To paraphrase The Go-Go’s: I got the beat.

That said, most of my dancing was done at hardcore shows, where I’m sure cringeworthy moves like “Pickin’ Up Change” (ask your dad) have since been rightfully outlawed. I certainly didn’t move with the fluidity and grace of The Specialized Extracurricular Execution Squad, protagonists of 2006 RPG Persona 3. Those guys ‘n’ gals can straighten the rug like Val Kilmer in Top Secret!

Persona 3: Dancing in Moonlight is a follow-up of sorts to the 2015 PS Vita title Persona 4: Dancing All Night and is the sister title to Persona 5: Dancing in Starlight. Having released in Japan earlier this year, Moonlight and Starlight are now preparing to rip up dance floors on this side of the pond. So put your best foot forward and let’s find out if the kids are alright. 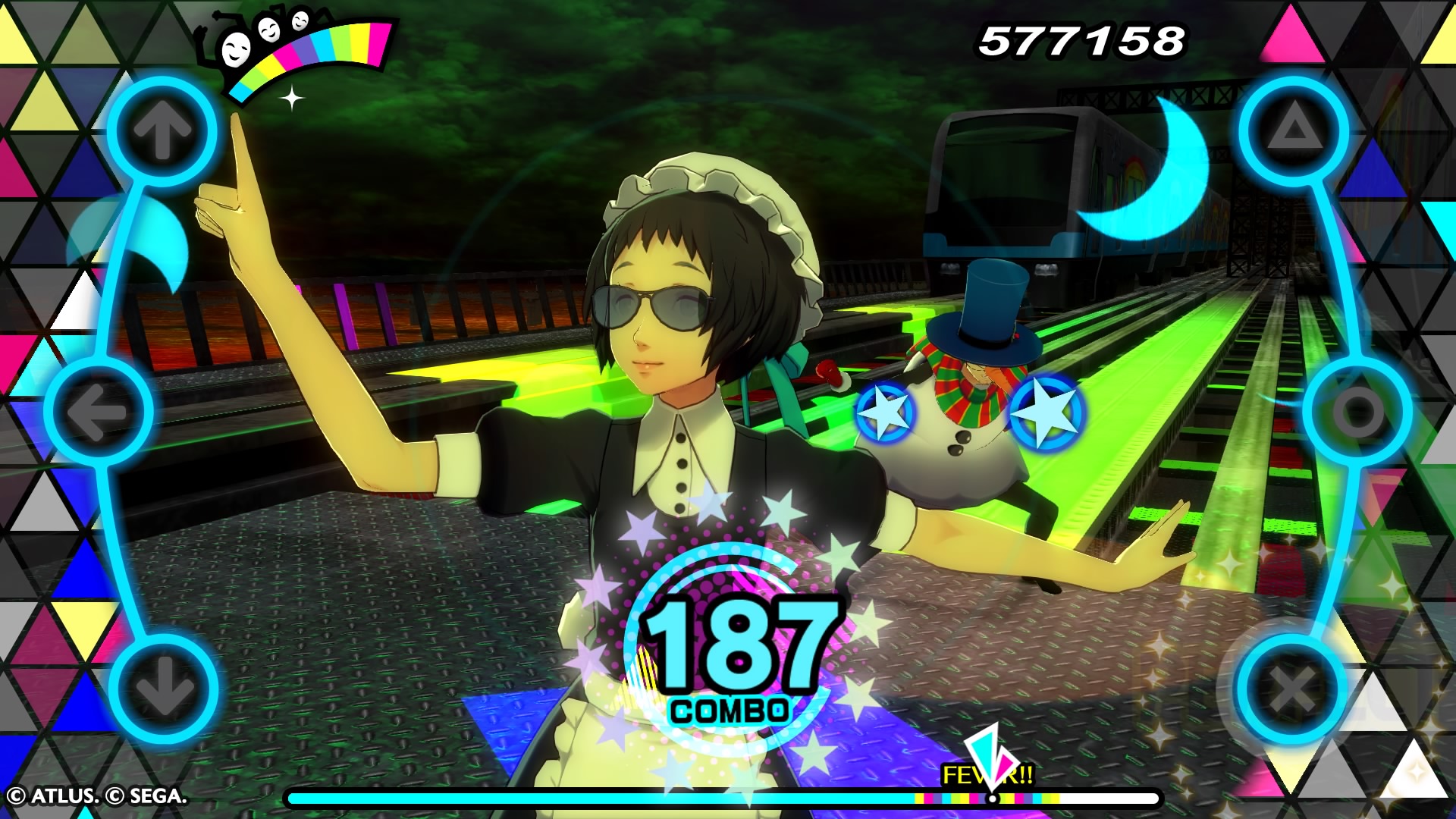 As short a time needs to be spent describing Moonlight’s gameplay as the game itself spends on its own narrative. Essentially, manic Velvet Room assistant Elizabeth has called forth the Persona 3 heroes (henceforth referred to as “the SEES”) to partake in an inter-dimensional “ball.” The SEES members have been selected to prove themselves the best dance troupe this side of the Metaverse, lest Elizabeth lose an ongoing bet with her grumpy younger sister. Fortunately, in this world, everybody can jive like a fully-fledged pro by merely thinking about the steps they want to pull off. That’s fucking handy.

Thus, the player guides Makoto, Junpei, Fuuka, Mitsuru, and co. through a series of slick performances: rhythm-action sequences which require perfectly-timed button presses and some stick-flicking for “scratch” effects. It’s typical rhythm-action gameplay, with a control format almost unchanged from All Night. While you fumble your way through Shoji Meguro’s music, one of SEES’ hep-cats busts a move in the background, possibly being joined by a partner or two, should the player perform particularly well.

Speaking of Dancing All Night, Moonlight/Starlight have learned some lessons from their predecessor, resulting in some very welcome changes. Gone is the in-game currency mechanic, as is purchasing gear for characters on an individual basis. Now, all such getups are unlocked in sets. No more buying one pair of sunglasses for one single character; items now unlock for the entire cast at the same time.

Modifiers have also returned to provide help, or hindrance, depending on your own button-bashing abilities. These can be toggled to alter note speed, mirror the chart layout, auto-scratch, remove score boosts, and more. Alongside four difficulty levels, there are options allowing players to alter cheers and sound effects, pick their dance partners, and save their favourite costume loadouts. Both English and Japanese dubs are included, though the English voice actors do a great job.

Replacing All Night‘s tedious, unending Story Mode is the new Social Link system. As the player passes milestones, they unlock a series of fun and silly cutscenes, which sees the SEES’ members interact with each other in short conversation. Viewing these skits unlocks further in-game items and, eventually, gives way to a bizarre hidden object mini-game. Though some of these scenes are genuinely very funny, (Aigis is gold), more importantly the joy of seeing the Persona 3 cast reunited cannot be underestimated. Even if the lovely new character models just make one yearn for a P3 remake… sigh. 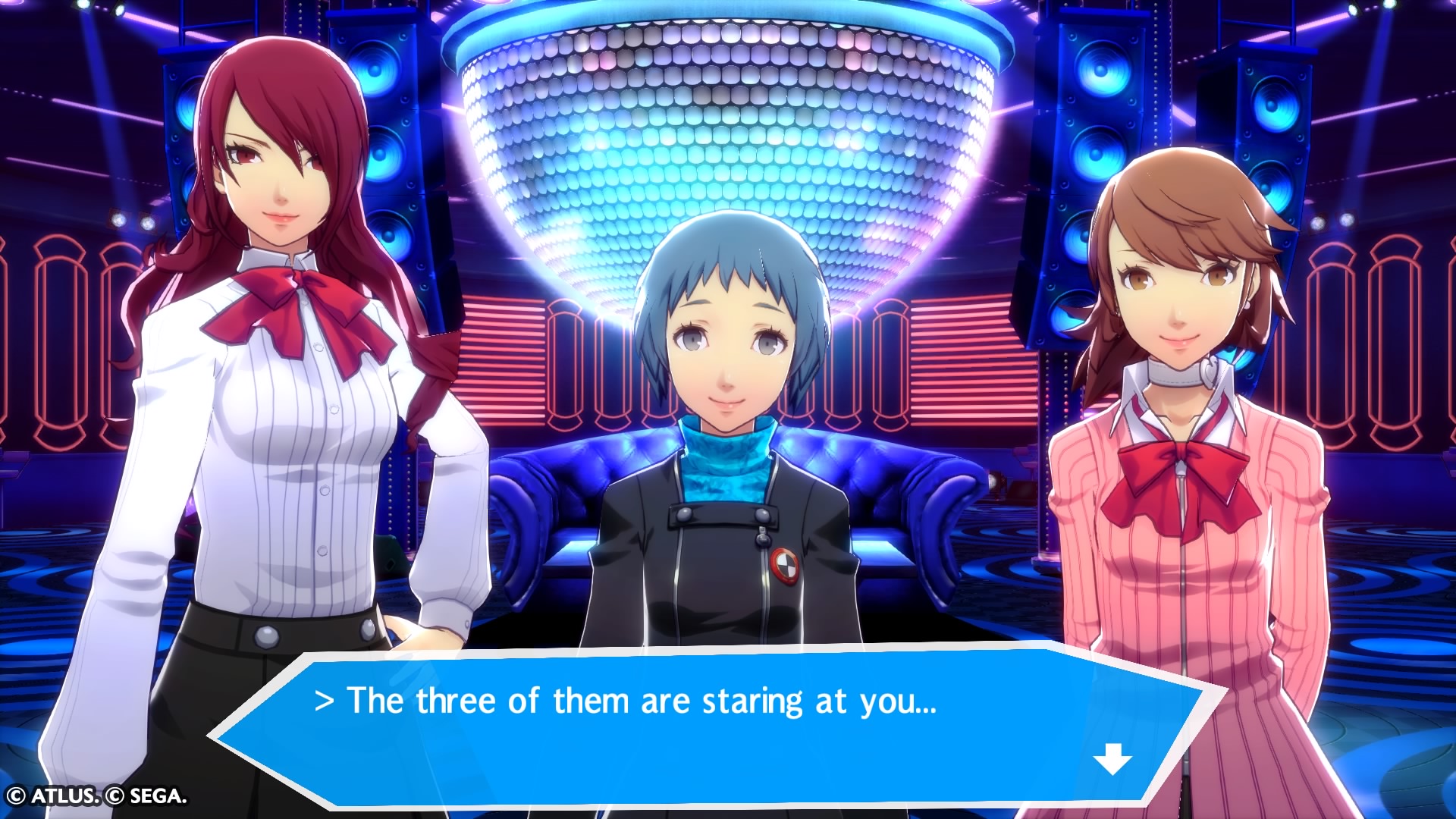 Despite the gorgeous models and fantastic dance routines, there is admittedly a strange lack of “life” when compared to its predecessor. The dance stages feel weirdly lonely and Moonlight is missing not only All Night’s excellent video effects, but also its cool loading screens. Even those odd sequences where Personas themselves turn up to bust out slap-bass solos are gone… eh, maybe that’s for the best. An unforgivable omission, however, is the removal of Jukebox mode. Still, Perfect Play, Replay, and the PSVR-compatible character viewers are all welcome features.

The quality of the music tracks provided by Meguro and chums is obviously subjective, but the repetition in Moonlight’s playlist isn’t. Despite having only around 25 tracks in total, there are still multiple remixes. Some great music videos do liven up the playlist (including an excellent electro-promo featuring the female cast and a wonderful, moving finale), but you have to raise an eyebrow at certain creative liberties, like including Persona 3’s end credit sequence as a “music video.” The dances themselves are alive with character and beautifully choreographed, always improved by the addition of the ridiculous, stylish, and sexy outfits and accessories on offer.

On the crucial topic of value, Persona 3: Dancing in Moonlight doesn’t warrant its $60 tag. It’s a great game, no doubt; most Persona fans will be over the moon with its soundtrack, character models, narrative fiction, and fanservice. Regardless, there isn’t enough here to justify buying what is essentially a small-scale spin-off for big-budget prices. I think Atlus would’ve been better served conceiving Moonlight and Starlight as one singular title, chopping out some repetition, and exploring the crossover potential of melding the two universes together, ala Persona Q2. 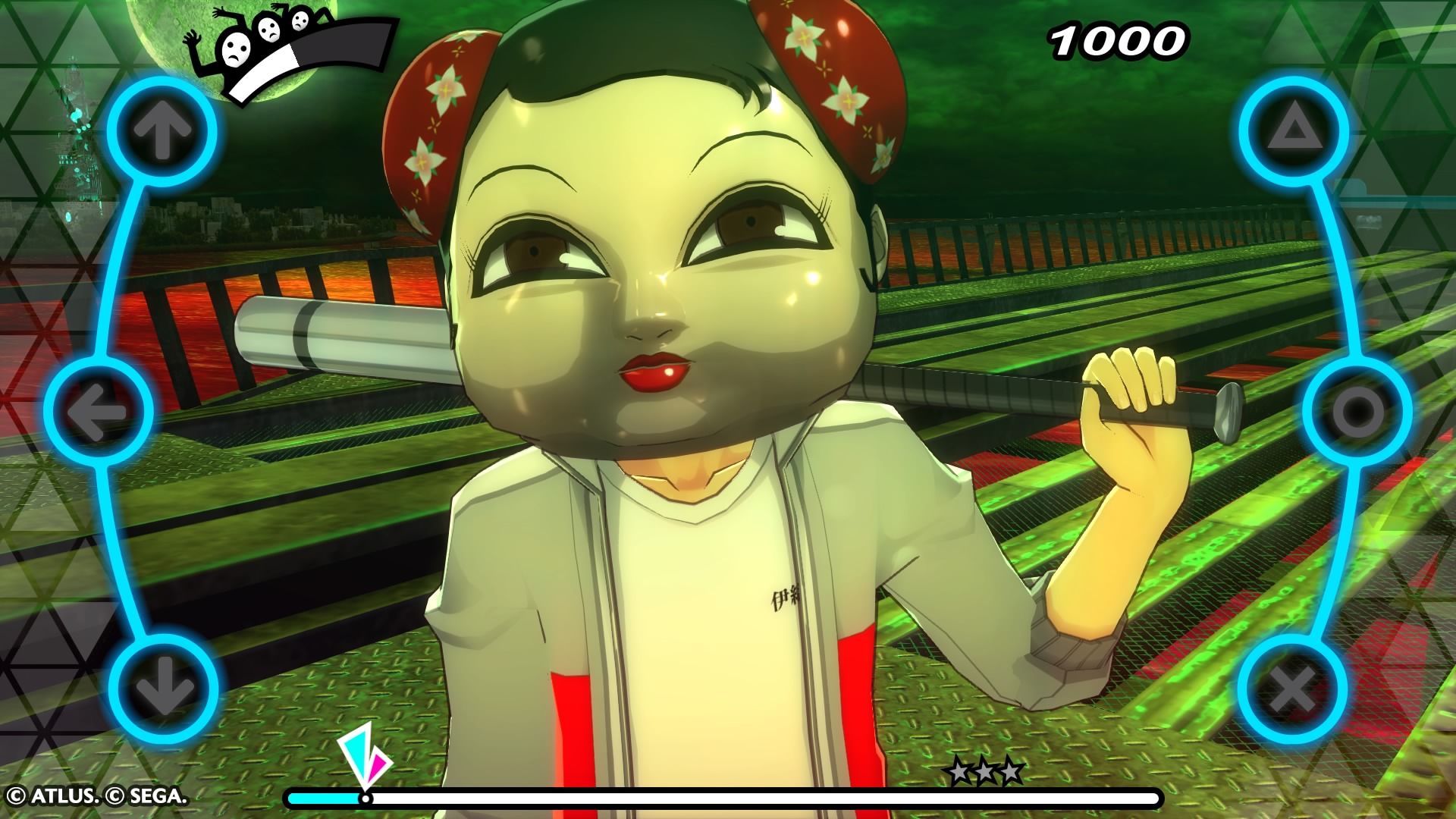 I would recommend (and I stress this wholeheartedly) that interested parties consider either purchasing the Endless Night Collection – featuring all three games – or nothing at all. If you’re enough of a Persona lover to warrant dropping 60 bucks on a rhythm-action spin-off, then it’s much better value to stick another $40 on top and get a plethora of extra characters, music tracks, costumes and cutscenes. $100 is still a hefty price, of course, but if you’re passionate about the franchise, there’s a lot of enjoyment to be had here. Casual followers of the series, or rhythm games in general, should definitely think on before considering the purchase.

Persona 3: Dancing in Moonlight delivers upon expectations without quite surpassing them. It’s a very welcome return for a great cast of characters with a fun, colourful and challenging rhythm-action game wrapped around their weird and entertaining universe. Though the price of entry is undeniably high, there is definitely a party happening in the Velvet Room, and few Persona fans in attendance will find themselves leaving disappointed.

Solid and definitely has an audience. There could be some hard-to-ignore faults, but the experience is fun.
How we score:  The destructoid reviews guide