Feed your head to the web

It is a rare thing that I would ever purchase a console for one game, and it’s usually for some pretty strange titles. Back when Katamari Damacy came out on the PlayStation 2, I bought the game before I even owned the system fearing it would be a rare and obscure gem. A month later I bought a PS2 and never looked back, and although I did own a ton of other games after, I never got rid of Katamari until the day it got lost in a move. (I still miss it.)

The second time was when I bought a PlayStation Vita just to play TxK. My love for the Tempest series didn’t begin until I was running a small eBay business selling old games and got my hands on an Atari Jaguar. Immediately I realised the brilliance of Tempest 2000, from the frenetic arcade gameplay, to the soundtrack and the ultra trippy and bizarre graphics. I sold the thing off eventually, and all the rest of the games on the system were crap, but Tempest 2000 was magical. So when I got TxK, I played it for months on end and still do, feeling it was an even better experience overall than 2000, although the Vita was not the ideal way to experience and I was pining for a proper console/PC port.

Drama between Atari and the two-man development team Llamasoft (responsible for Tempest 2000, 3000, and TxK) meant this would never happen – at least not with the original name. A legal misunderstanding ensured that Jeff Minter and Ivan Zorzin (Giles) of Llamasoft would be prevented from porting their lovechild TxK to any other platform, as it was “too much like the IP Tempest,” a game that Minter himself had essentially revitalised and created from the ground up. Without getting into the legal nonsense and pointing fingers, this story had a happy ending when Atari and Llamasoft were able to work out their issues, and agree to finally port TxK to other consoles under the name Tempest 4000. 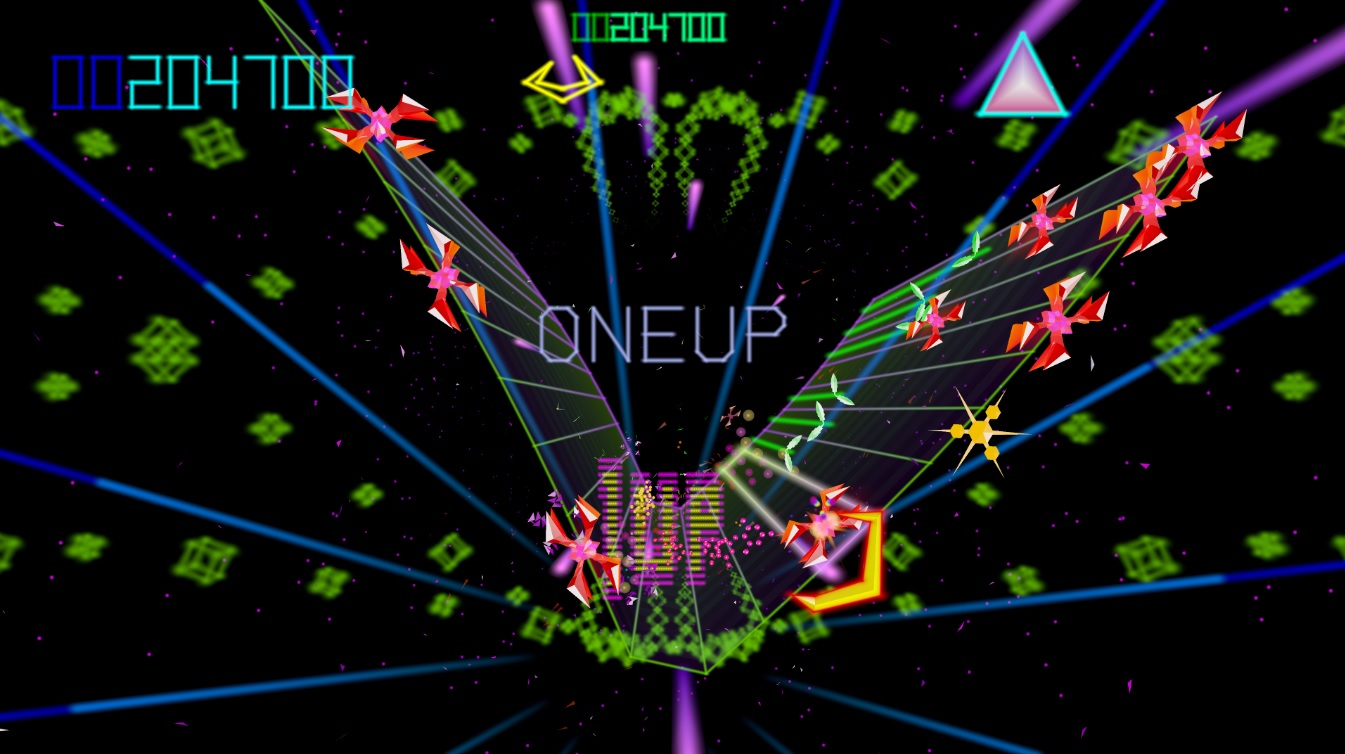 So no, Tempest 4000 is not exactly a “new” game. There are certainly new things about it, but it is absolutely a remastered and slightly improved port of TxK. Whether this will be a problem or not depends largely on how you feel about the Tempest series at large, including a couple of issues that may hold the game back for some.

The premise of Tempest is simple enough to understand. On a vector graphics landscape, you control “the claw,” a little yellow polygonal shape tied to a “tube” of grid lines with enemies emerging from the opposite side. You shoot them. The screen erupts in an orgy of colours and screen-warping effects that make you feel like you just took a hit of LSD. You collect power-ups throughout the stage such as the ability to jump off the grid to attack enemies which have reached the top, and an A.I. droid my wife named “fuzzy” who helps you wipe out enemies and can save you if you are captured by an enemy touching you. That’s it, for a hundred levels. And it’s fucking glorious.

There is a lot going on visually in Tempest 4000, which is par for the course when it comes to Llamasoft titles. Jeff Minter is the father of the visualiser, going back to his days programming on old computers like the VIC 20 and the Commodore 64. If you have used a visualiser while listening to music, there is a chance Minter either had a part in its creation directly, or that it was heavily inspired by one of his creations. Tempest 4000, among many of his other games, blends this aesthetic with the gameplay to trippy effect. It’s an absolute incomprehensible shitshow when you aren’t used to it, but as you familiarise yourself with the enemy types introduced throughout stages and become more comfortable, you enter a zone where you become one with the game, and you can cut through confusion. But first-timers will likely be put off pretty early until they have had enough time to acclimate.

If you can get used to the screaming, overbearing visual style, T4K is a fist-pumping rave with a heartbeat of thumping techno at its core replete with breathtaking moments of tension and skin-of-your-teeth close calls marbling its meaty action centre. Bonus stages are triggered occasionally with the collection of triangle-shaped icons, and mercifully break up rounds by giving players a brief trance-like breather before dropping them back into the action.

While not a rhythm game by any stretch, shades of Rez and Thumper are present aurally and visually while T4K still strongly identifies with and sticks to its arcade roots. And the two primary soundtracks available – one from Tempest 2000 (along with a CD audio variant of it) and the other from TxK – are triumphant to behold and suit the game perfectly. (You select between these with the triangle button on the level select menu which the game does not seem to indicate anywhere, FYI.)

If there are any problems, they stem from what was retained from TxK. There isn’t a great deal of extra content here; there are two primary game modes, Pure and Classic, where you will spend your time. All that means is that in Pure mode, you start from level one and play as long as you can and it has its own leaderboard. Classic just gives you the ability to choose from any stage you have played, starting with the number of lives you began that level with before you had a game over. You will be thankful Classic exists if you want to see all the levels; shit gets real after level 60 or so.

The volume is a little unbalanced between the sound effects and music depending on the soundtrack chosen, so if you are like me and flip between them frequently, you will be adjusting this in the options menu often, which is scant and basic at best. PC users have also complained of control issues and problems with 144hz monitors doubling the game’s speed. While I experienced no issues on the PlayStation 4, this is something you will want to be aware of should you choose to play it on PC. Also, the price of Tempest 4000 is significantly more than TxK was which is going to sour a few people, but it is nice to have a physical copy available at launch, so there’s that. 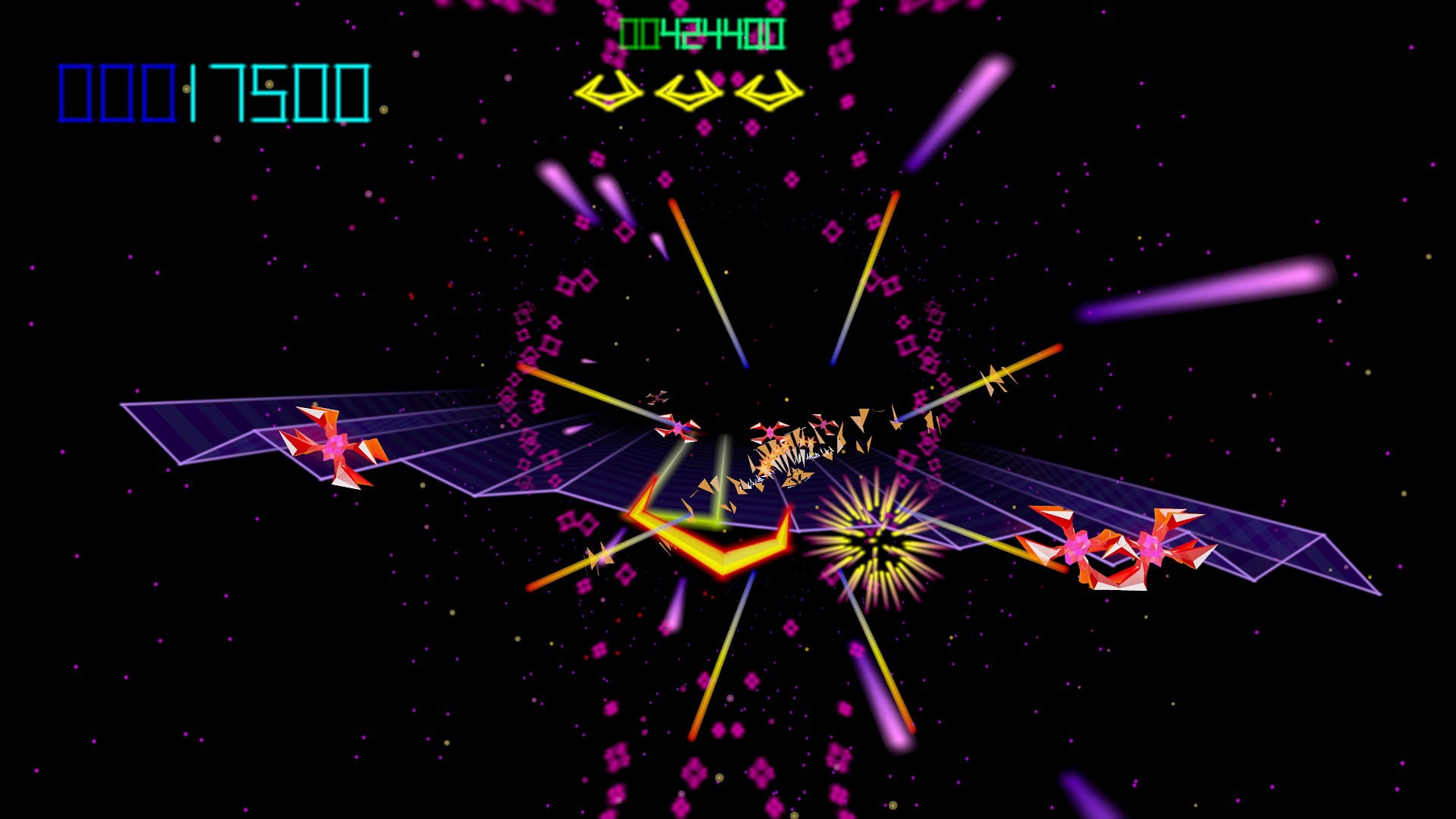 It’s hard to be “objective” about one of my favourite games of all time, which Tempest 4000 effectively is. It is the best version of TxK available, and although it only has minor tweaks to the actual mechanics, the addition of one of the best game soundtracks ever made from Tempest 2000 enhances what I already felt was the definitive Tempest experience.

If you are not a fan of simple arcade games, which it most undoubtedly is, you probably won’t find much in Tempest 4000 to win you over. But for those who have any love for the series, and appreciation for the era of the arcade, you absolutely can’t go wrong with this one. I prolonged this review longer than necessary because I just wasn’t done playing it – and I’m still not. It’s a winner.

A hallmark of excellence. There may be flaws, but they are negligible and won’t cause massive damage.
How we score:  The destructoid reviews guide