If you were to tell me that your Uncle Who Totally Works At Sega said that Valkyria Chronicles 4, the latest game in the tactical role-playing franchise, was actually developed in 2009 as the original sequel to 2008’s Valkyria Chronicles, and then locked up in a vault for ten years before finally being released this month, I would believe you. Sure, I’d be suspicious because the game is called Valkyria Chronicles 4 and not 2, but your case would otherwise be convincing. 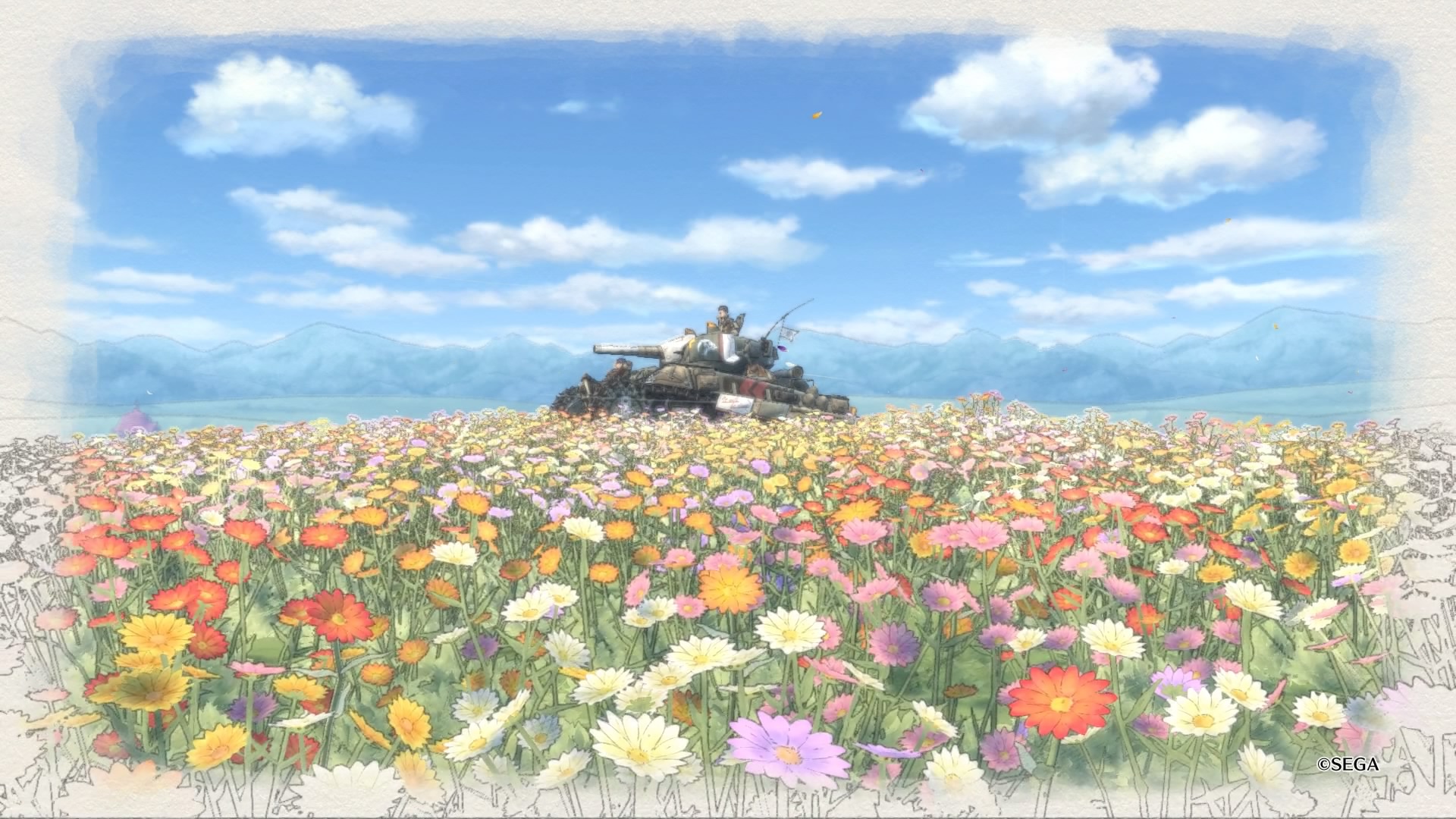 This is not to say that that’s a bad thing, mind you. Sure, I may have liked the sequels – at one point a younger, dumber version of me even argued Valkyria Chronicles 2 was the best one – but there’s no denying that Valkyria Chronicles is the most well-known and well-regarded part of the franchise. Attempting to recall that old glory is understandable, and even preferable, all things considered. It’s a gorgeous glory to recall, after all.

More than any other installment (thanks to being on modern platforms instead of the PSP), Valkyria Chronicles 4 looks better than ever. Even at a time when there are at least half a dozen absolutely excellent games rocking an anime-style aesthetic on shelves now, nothing looks quite like a Valkyria Chronicles game. Detailed dieselpunk mechanical designs cribbed off 20th-century military hardware, the sharp-edged characters of artist Raita Honjou, and the painterly colors and comic-book special effects of the game’s custom CANVAS engine make for an aesthetic triple threat that Sega has done well not to mess with. The game even takes the opportunity to change things up by transitioning to a winter environment halfway through, just to show all the characters in sweet-looking fur-lined snow jackets and the like.

As with the original, the tension between the game’s peaceful look and its warlike nature is reflected in the storytelling. Set once again on the fake-European continent of “Europa” Valkyria Chronicles 4 runs in parallel with the original, occurring during the “Second Europan War” between the Atlantic Federation – a vague approximation of the real-world Allied powers – and the Empire, a menacing amalgamation of Germany and Russia’s imperial periods, with a predilection for wacky science experiments and silver-haired super-soldiers. The first game followed the plucky youngsters of Gallian Militia Squad 7 as it fought to repel the Imperial invasion of Gallia (aka Anime Belgium). This fourth game picks its plucky youngsters from the Federation’s ranks this time, specifically the Armored Ranger Squad E, tasked with salvaging the Federation’s war effort…by counter-invading the Empire’s capital city. 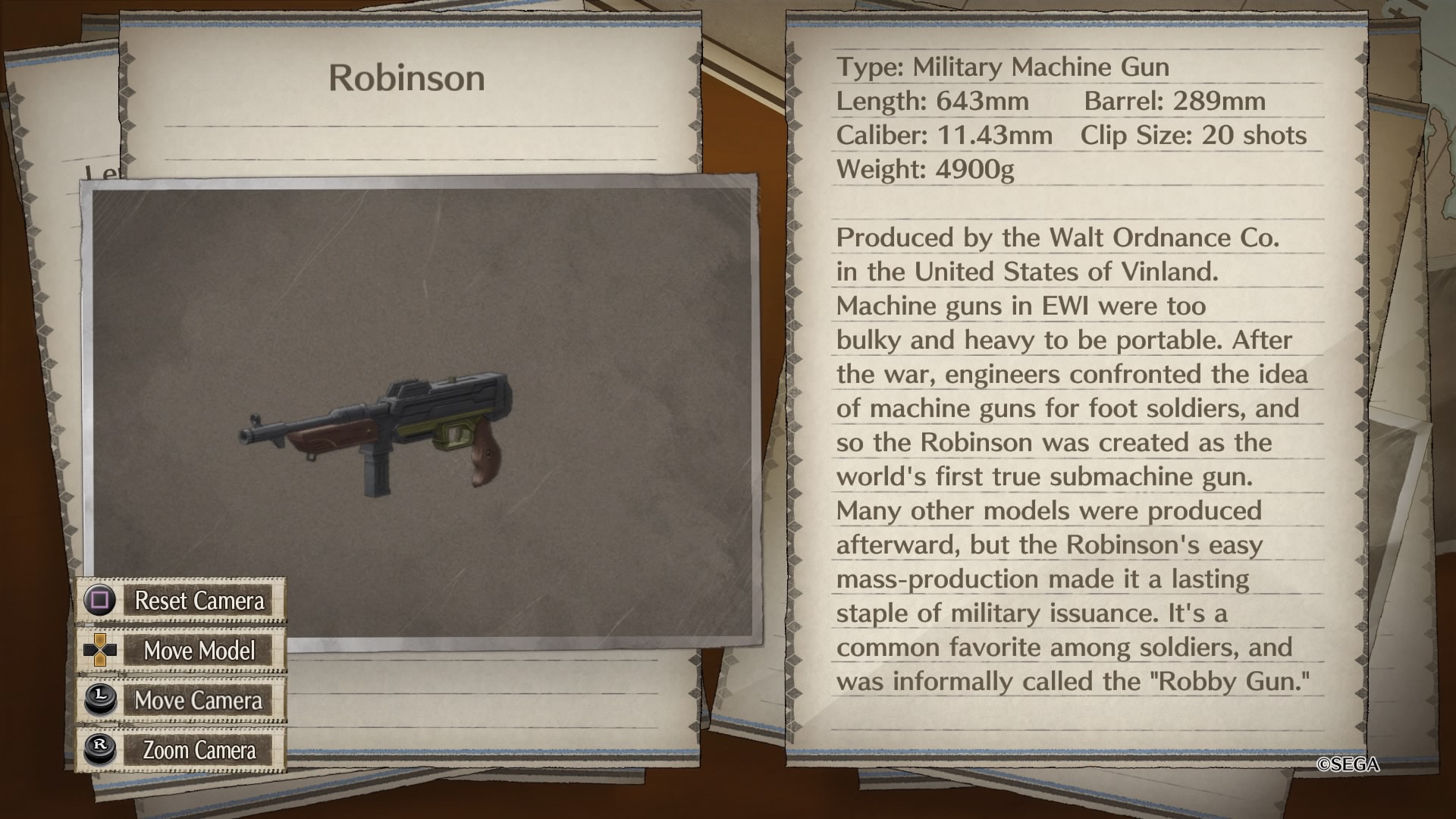 That’s pretty dramatic and all, but in general the plot of Valkyria Chronicles 4 is pretty straightforward, bordering on painfully earnest. The bad guys are mostly bad, the good guys (your guys especially) are mostly good, and no matter how bad things get, there’s always some time for a cutesy rom-com gag, an inspirational platitude, or beach episode DLC. And that’s fine, for the most part. It’s not as if the franchise is known for nuance, and the Empire itself has just enough actual Nazi analogues in its portrayal that no one really wants to take its side. That said, veterans who did get to enjoy the deeper lore of Valkyria Chronicles 2‘s civil war plot or the “dark history”  angle of Valkyria Chronicles 3 may see 4‘s campaign as a step back.

To its credit, Valkyria Chronicles 4 plays to the series’ strengths at characterization. The core cast, a group of childhood friends that signed up together after the Empire torched their Gallian hometown, is appealing in its chummy dynamic. Their personal clashes and dilemmas are even touching at times, though predictably cliche, and overall the game’s interactions strike a better balance between the schoolyard antics of Valkyria Chronicles 2‘s academy students and 3‘s po-faced penal battalion. Things shine brighter as one explores the dozens of available squadmates, each made that much more real by their biographies, their “Potentials” – passive traits based on their personalities – and their bonds with fellow squaddies. Between this and optional “Squad Stories” side missions, Valkyria Chronicles 4 continues the franchise’s grand tradition of making your squaddies feel like more than little bundles of statistics, and does so well enough that it’s no wonder that users modded similar gameplay features into other franchises, like XCOM.

As far as world-building goes, the game’s historical inspirations are as obvious as a pinup girl painted on the side of a bomber’s nose. I’ve always thought the comparisons between the Valkyria Chronicles setting and real history are a bit overblown – often by fans a little too desperate to get non-anime-watching types to pay attention – but it’s saying something that I can roughly describe the entire first half of the game exclusively using World War II analogies. For example, the movements through the first chapters are pretty much “Market Garden transitioning into Operation Barbarossa, with similar results”. The story does go to wilder places, particularly in the back half of the campaign, as the game puts a face and personality to its antagonists, and as the titular Valkyria start getting involved. Be advised: Those looking for a more grounded war story, or with a low tolerance for what might lovingly be called “anime hijinks” are best served elsewhere. 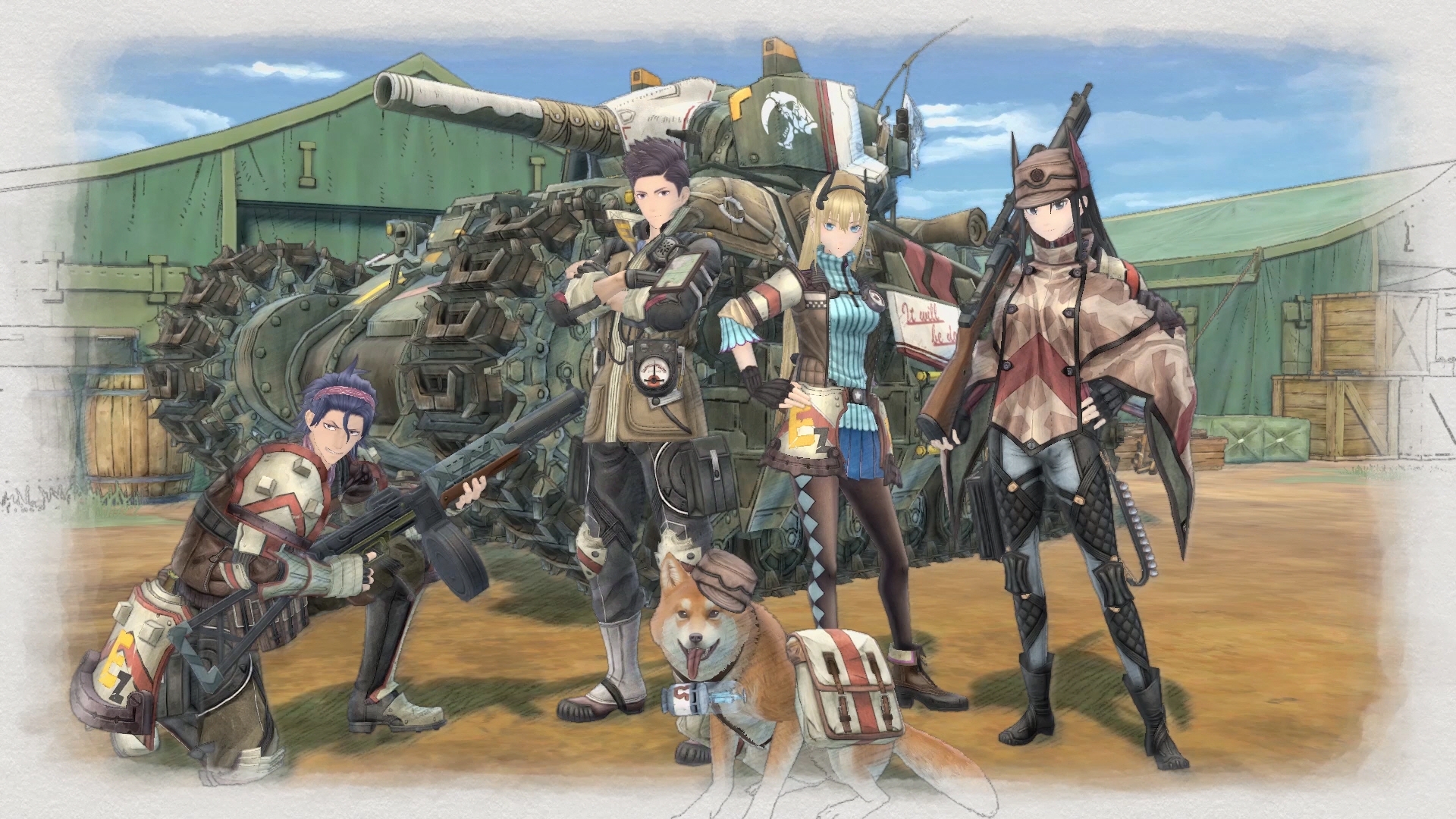 The folks that are well-served by Valkyria Chronicles 4 are those whose definition of a good sequel is “Like the first one, but with more and better stuff.” It appears that Sega’s approach to putting the game together involved expanding on the original while cherry-picking the best ideas from its sequels.

As ever, combat in the game is handled via the franchise’s signature blend of turn-based strategy and quasi-real-time combat. During their phase, each side is given a budget of “Command Points” (CP) to spend directly controlling members of their squads. Multiple CP can be spent to make a soldier perform actions in succession, and can also be spent issuing “Orders”, powerful temporary buffs to performance. Squads are made up of a mix of different classes. The classic quintet of nimble Scouts, tough Shocktroopers, anti-armor Lancers, versatile Engineers, and deadly Snipers are all present, though the shielded Armored Tech class introduced in subsequent games is missing in action. 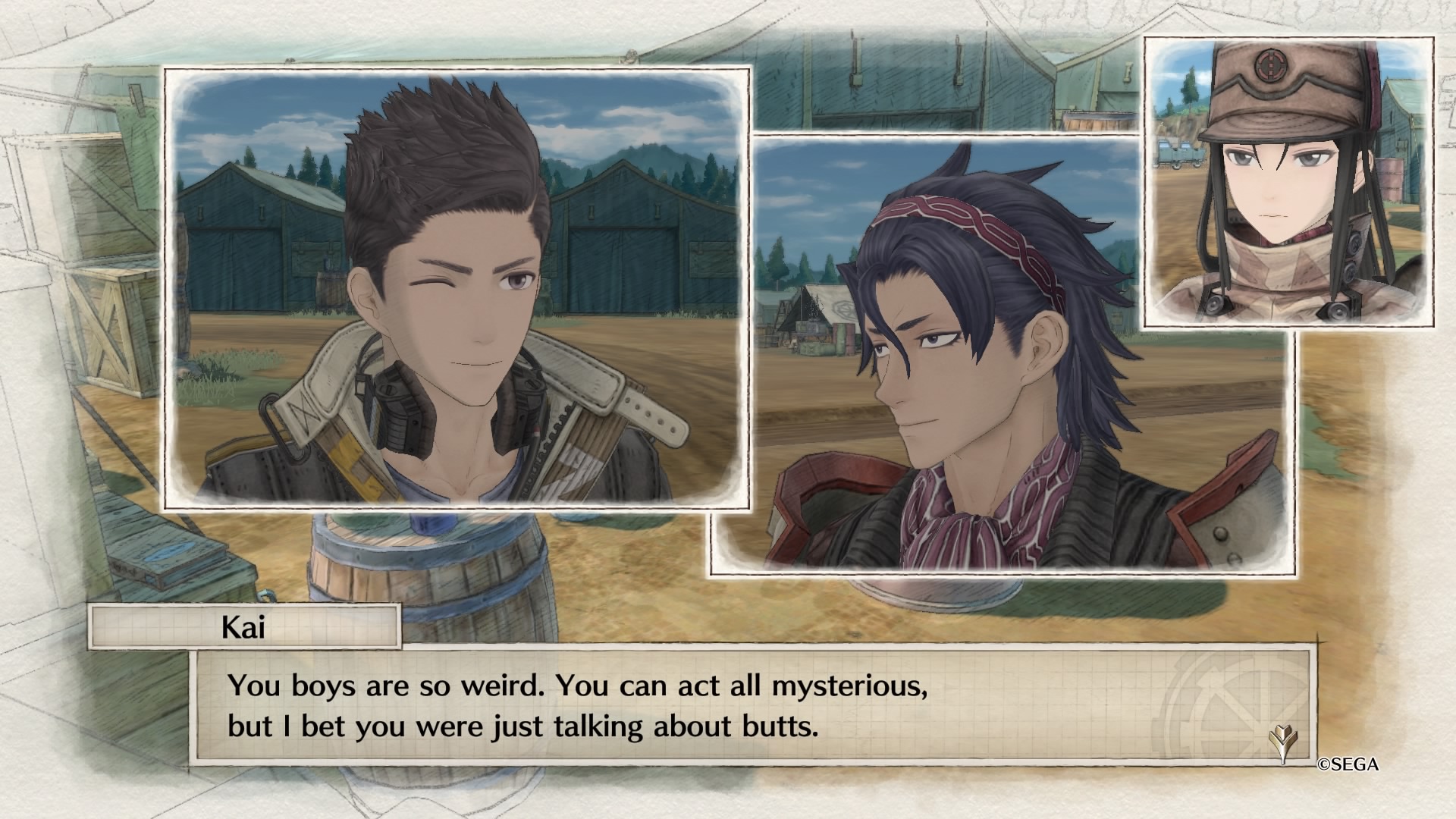 Instead, the sixth soldier class this time is the the Grenadier. Grenadiers carry a massive portable mortar on their backs, and are capable of firing artillery at any enemy in range – even over cover – so long as other characters can spot for them. Grenadiers are even capable of interception fire, and can make any approach a no-man’s land during both enemy and player turns. Simply put, they’re a game-changer in terms of the tactical texture of Valkyria Chronicles, since their long range and indirect trajectory enables all manner of interesting gambits (even taking into account that artillery-like weapons were available in the other games). Grenadiers also make Engineers an actually useful class this time, since they need frequent resupplies of ammo and health. Other additions to the feature list include “Last Stands” that allow a mortally wounded soldier to carry out one last attack (or “die” dramatically and refund their cost in CP), and a trick from Valkyria Chronicles 3 that allows an officer to piggyback two other squaddies in their action turn – a very useful mechanic for getting the most out of the less-mobile classes, like Lancers and Grenadiers. 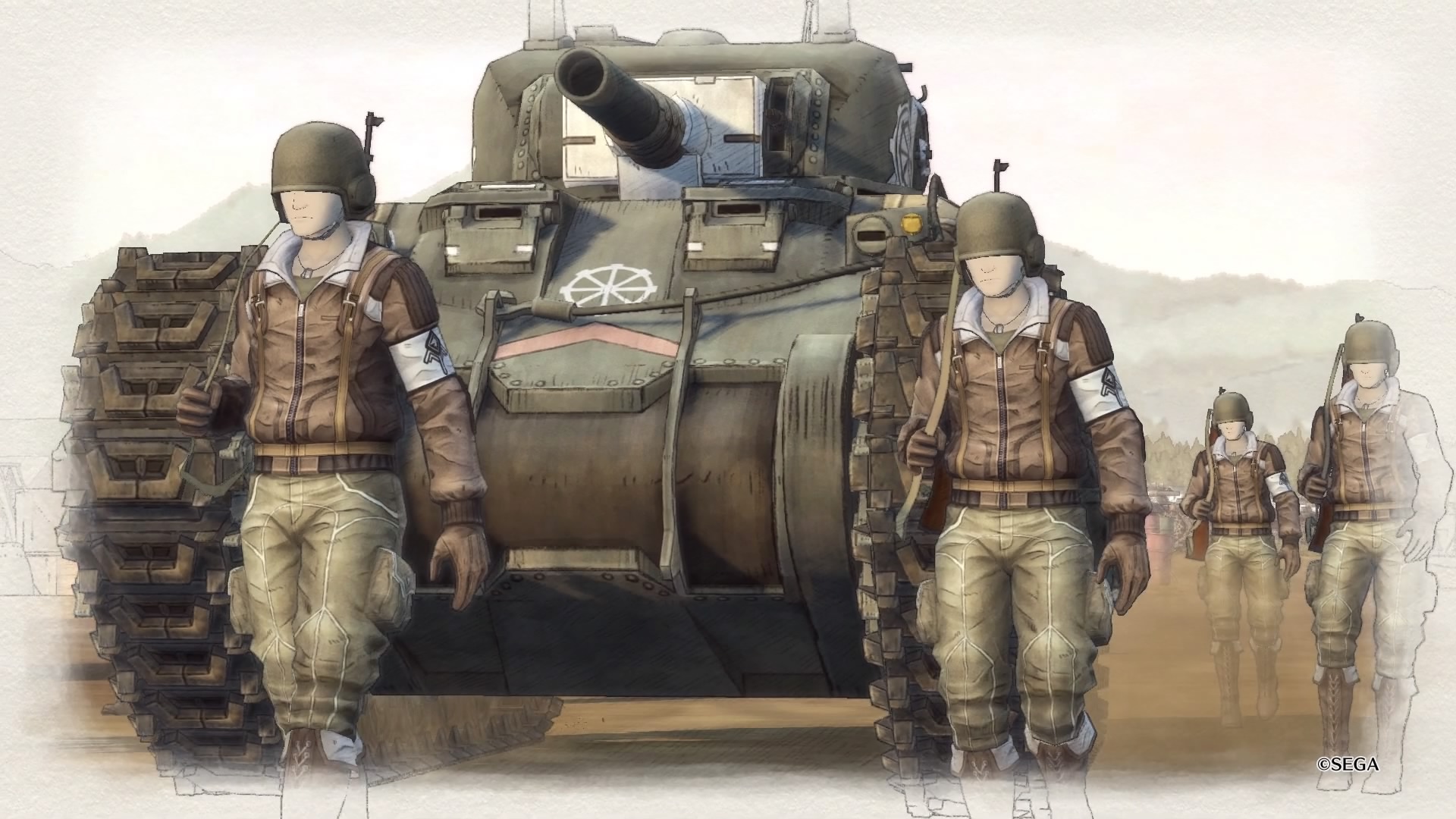 Even the mission design shows the lessons learned from three games spent iterating on these foundational mechanics. While every outing can usually be boiled down to one or two core objective types (such as capturing a certain checkpoint), scripted events and environmental gimmickry keeps the structure from getting stale, and challenges players’ initial deployments. A mission might begin with a ground assault against a defended capture point (perfect for a squad of Shocktroopers with Grenadier backup), but then, without warning, change over to a fighting retreat, forcing some creative thinking to keep the slow, vulnerable Grenadiers out of harm’s way. Others might demand specialized objectives, like using snipers on the high ground to deny parachuting foes a smooth landing. Twists like that can result in surprisingly brutal battles. I took more casualties in Valkyria Chronicles 4 than in any other installment, and even failed outright multiple times in a row on normal difficulty towards the end, something that never happened in the other three games. Missions can get tougher still in the more explicitly puzzle-like Squad Stories and challenge maps, such as those that stick the player with a specific squad makeup or use super-tough elite enemies. Thankfully, the benefit of foresight and optional skirmishes to grind for exp and cash can soften the sting of defeat, and I got through my run without permanently losing a soldier.

If there’s one downside to this approach, it’s that it clashes with the reward structure of the game. Like the other games in the series, Valkyria Chronicles 4 hands out experience points and money primarily based on speed, i.e. completing a mission in as few turns as possible. This emphasis on speed can frustrate more methodical players, and can also encourage a style of play that is very “game-y”, one that emphasizes running past enemies to capture objectives practically abusing the Order buffs to break the “rules”. This quibble isn’t unique to Valkyria Chronicles 4, and I’ve personally made my peace with it, but suffice to say that people who like their squad-tactics games “realistic” may end up frustrated by the mission grades they receive. Further, though the game bills itself as a hybrid of strategy and shooter, the “shooter” portions are dreadful if taken by the standards of dedicated action games. Animations are fiddly, aiming is slow, terrain is awfully specific about what can can can’t be traversed, and shooting has the Fallout 3 problem of ultimately being determined by the roll of the dice rather than the player’s aiming skill. 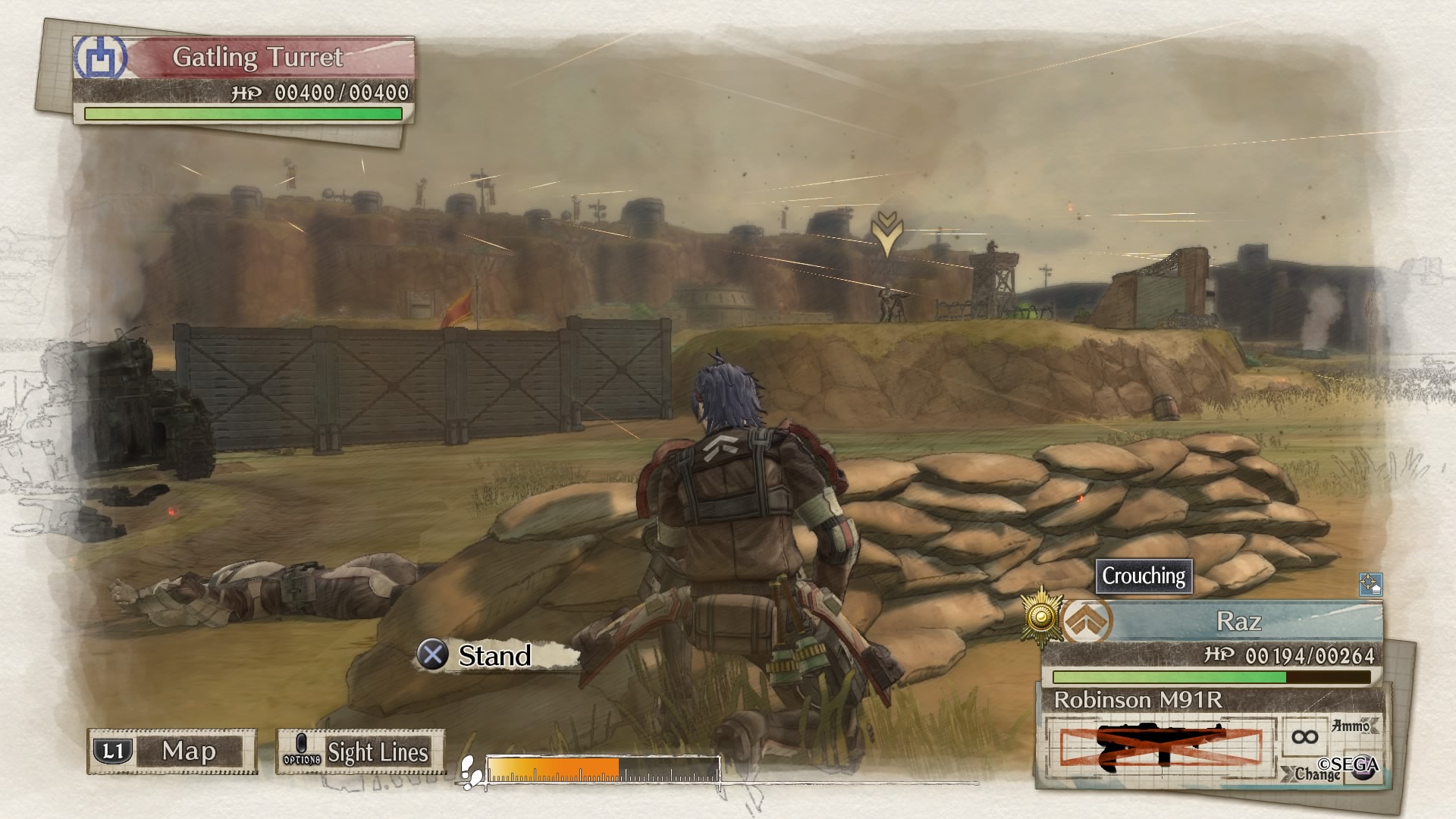 There are more subtle improvements to be perceived, especially for veteran players. Grenadiers, as well as balance-related changes help to curb (if not eliminate) the gonzo Scout-rush antics that ultimately broke the other games. Even relatively simple-seeming changes, like AI behavior that actually targets soldiers left exposed (or tanks left with visible weak points) has made for a better (if tougher) experience overall. But other minor annoyances were present as early as the first game remain, like the way it backs out to the menu every time a cutscene changes, or the too many button presses required to do almost anything of substance in the Headquarters UI. I understand the desire to evoke Valkyria Chronicles as much as possible, but these are, frankly, things that could’ve been ditched without much outcry.But that’s just me, and I will readily admit not quite being in the target demographic Sega aimed to reach with Valkyria Chronicles 4. Those people that might have played or heard about the original on PS3, or the remastered edition on PC and PS4, while missing out on the interesting, but ultimately doomed PSP sequels, are who matter (rather than diehards like me who would’ve bought it anyway), and that crowd are going to be happy with Valkyria Chronicles 4‘s unqualified success in terms of expanding and improving on the original’s visuals and mechanics, while building out the story and setting. 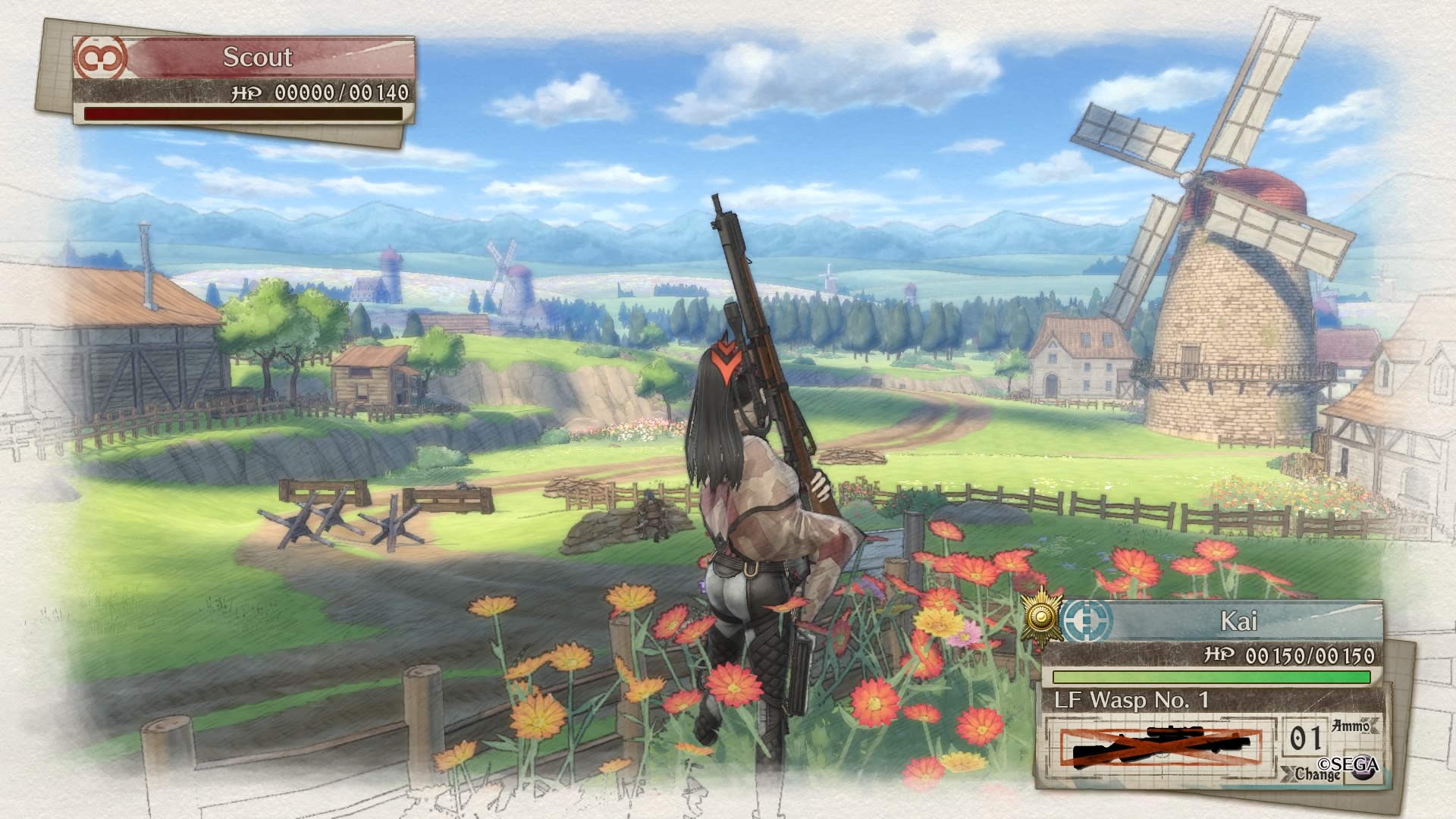