Wake up, Crono, it’s time for The 300, my radical dream to see more than 300 movies in theaters in 2018. I’ll be watching new releases, classics, hidden gems, and festival films to experience the wide world of cinema in all its form. With so much moviegoing variety, there’s probably something you’d be interested in as well.

I hit 300 movies in last week’s installment of The 300, which means I’m starting this week north of the goal. Consider this a victory lap. I’m not sure how many movies I’ll see beyond 300 given the holidays and travel plans, but I’ll continue to track my full year of filmgoing each week through 2018. This probably means I’ll write a top 50 movies of the year rather than a top 20. Also, if I hit a certain number of movies by December 31, I may even get the dinosaur ending.

A bit strapped for time this week, but I’ll have some additional thoughts on this extended movie-watching experience in the December installments this series. The end of the year is always a great excuse to look back before looking forward. For now, it’s back to the grind. 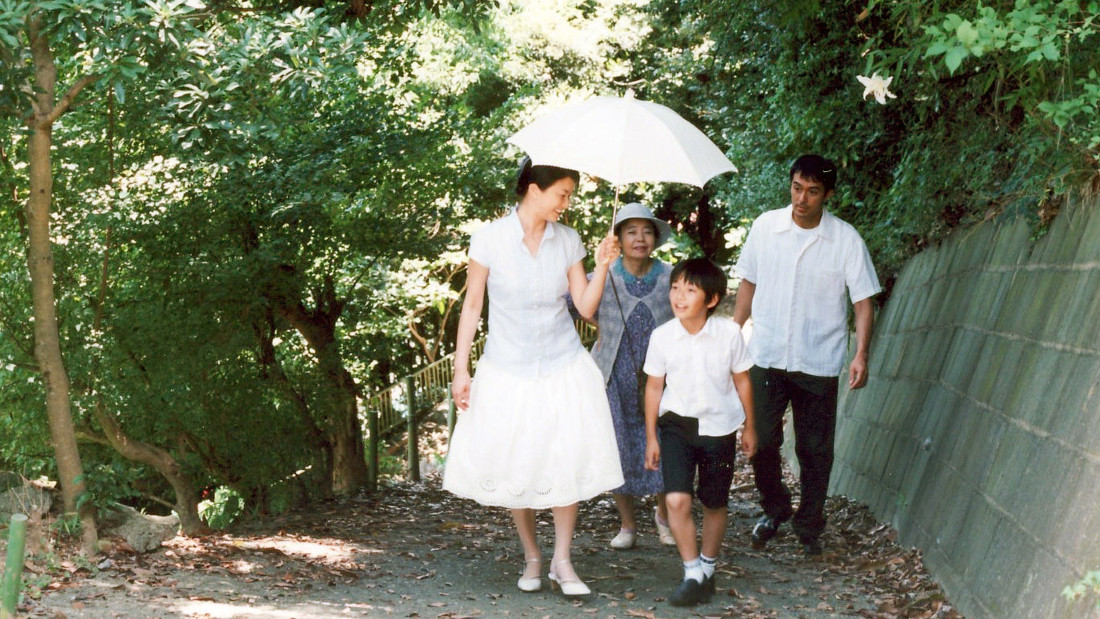 It made sense to follow Hirokazu Kore-eda’s remarkable After Life (The 300 Week 46) with some kind of playful pun. Hence the first film after 300 is Still Walking, another deeply affecting Kore-eda movie. This movie is firmly in Kore-eda’s wheelhouse, focusing on the minutiae of family dynamics and what that has to say about our connections to people who are close to us. On a hot summer’s day, a family comes together to commemorate the death of the eldest son 15 years ago. In just a single afternoon and evening, we understand the contours of the different relationships on screen, and the interpersonal and generational frictions of these well-rendered, imperfect people. I found myself particularly drawn to Still Walking’s exploration of familial disappointments. Children often fail to live up to their parents’ ideals, and vice versa. What then? We keep going, obviously.

It’s fascinating to see this film after seeing Kore-eda’s Shoplifters at the New York Film Festival (The 300 Week 39). We’re told in Shoplifters that the families we choose are sometimes preferable to the ones we’re born into. What I see in Still Walking is the difficult, begrudging love we have with blood relatives, and how those bonds are maintained even if they’re so bothersome. I also see the idea of families we build ourselves treated with incredible warmth in the way Ryota (Hiroshi Abe) and Yukari (Yui Natsukawa) interact; he’s her second husband, and she has a child from the previous marriage. I’m tempted to rewatch Kore-eda’s Like Father, Like Son to heighten this exploration of familial connection, and how this kinship can be about blood relation on its surface but is ultimately about so much more.

In this long year of filmgoing, Still Walking also reminded me of how a shot can be perfectly completed by the passing of a train. It’s a thought that I first had while watching Chantal Akerman’s hauntingly sad Les Rendez-vous d’Anna (The 300 Week 43), reified by Kore-eda a few weeks later. In my mind this notion is like a train ride started a month ago, completed only just now. 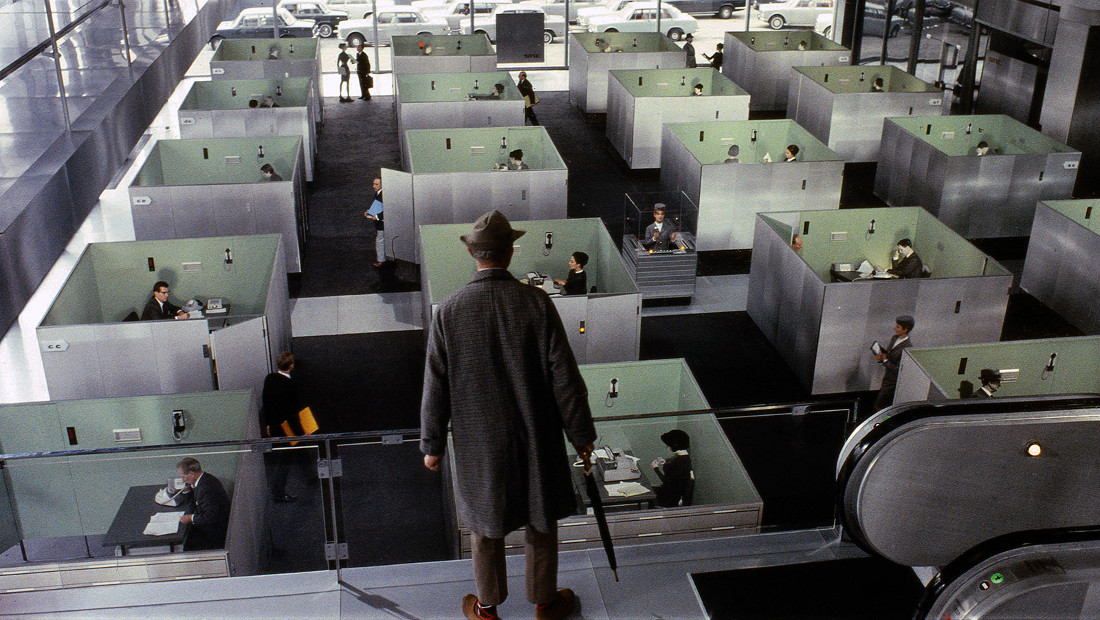 PlayTime is a constant sensory delight from beginning to end. While a financial failure at the time of release, the movie is Jacques Tati’s comic masterpiece. This was my first chance to see the film on the big screen, and I was struck by how much I caught when the movie was projected large. PlayTime covers a day in the life of an ultra-modern Paris, traveling from airports to expos to apartments to chic restaurants. The thin plot is secondary to the dense, layered pleasures of just watching.

PlayTime makes a game out of the act of watching the film. The first game is in the airport. Can you spot certain quirky background extras as they reappear? The movie is populated with false Monsieur Hulots, Tati’s comic persona that’s a bit like a suaver Charlie Chaplin and a more agile Mr. Bean. The next game is finding these faux-Hulots. There’s another game about tracking a blue folder, the identifying mark of the man the real Hulot must talk to amid the confusion of a busy cubicle-filled workplace. Later PlayTime games are about identifying cause and effect, and using your memory, and trying to notice something in a shot you’ve never noticed before.

PlayTime’s primary philosophical focus is on the world’s unavoidable homogeneity and dehumanization due to technology. Travel posters for different countries feature the same oppressive brick of a skyscraper dominating the local flavor. More genuine human interaction and cultural flair have been lost to the gray tastes of the modern world. Yet meaningful connection can still be found among people, even in the way the modern world refracts the beauties of the natural world. Consider how the bulbed stems of metal street lamps bend like the bowed heads of bellflowers. Maybe one way to cure the malaise of modernity is to engage in a kind of active, empathetic form of daily play; and, when possible, to view some of the world as if it were a grand picture book we’ve happened to walk into. 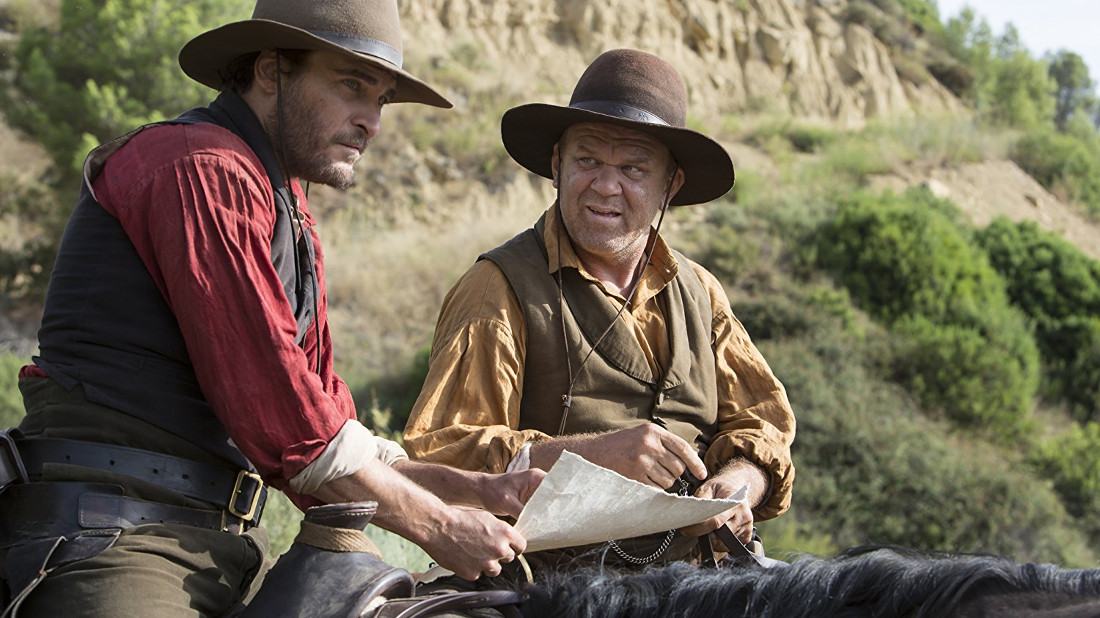 The Sisters Brothers is perfectly fine, though I was hoping for more. A little bit revisionist western and a little bit dark comedy, the film follows Eli and Charlie Sisters (John C. Reilly and Joaquin Phoenix), two hired guns on the tail of someone who’s cheated their boss. Eli is a gentle soul who’s turned gunslinger to watch over his drunken screw-up brother. As the film unfolds, the movie explores a desire to leave the range life, and the cruelties out on the open trail. Some of the notes about the Wild West vs. pastoral domesticity reminded me of John Ford’s The Searchers, one of many genre touchstones allude to by director/co-writer Jacques Audiard. And yet I felt like the story could have gone father even though it sustained my interest, or could have said more.

Then again, maybe the movie simply is what it is, and it is a great showcase for Reilly’s acting range. Eli is a fascinating brother’s keeper sort, and seems obsessed with higher-minded and more romantic ideas about being a gunslinger. While stopping by the town of Mayfield, Eli’s awkward roleplay-foreplay with a prostitute feels chivalrous rather than kinky. It’s such a funny yet so human (and therefore sad) scene, and Reilly’s voice and childish frustration and body language communicate so much so well. Maybe I’d just like a movie about Eli given how much I like Reilly as an actor. 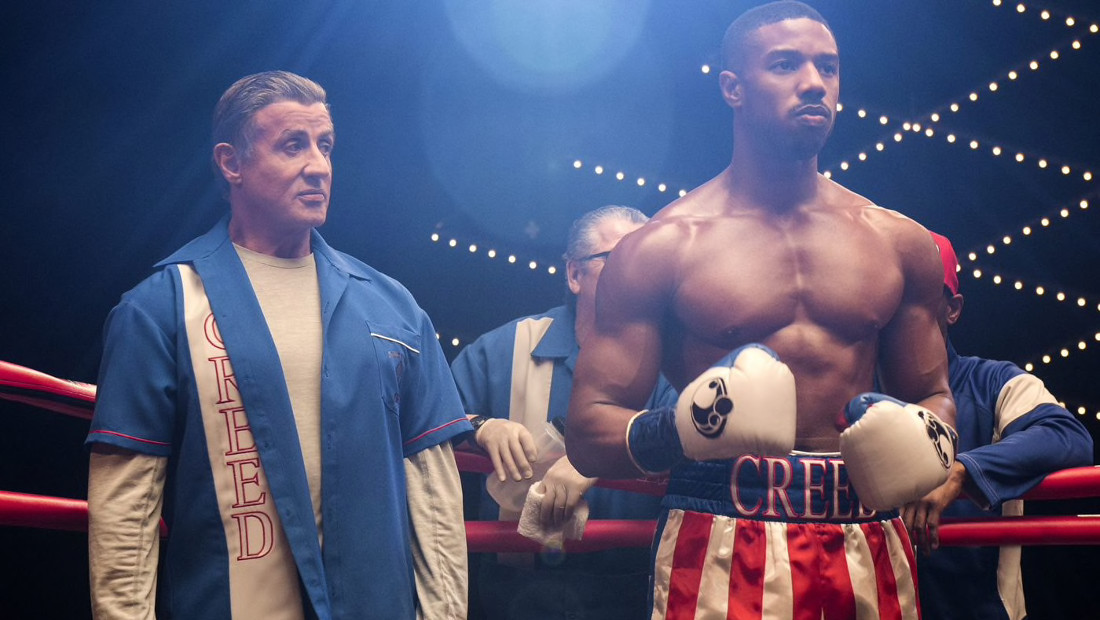 Creed II was an okay rehash of Rocky II-IV, but Adonis Creed (Michael B. Jordan) was the weakest part of his own film. Think of it like this: Rocky Balboa is a lovable underdog who won’t give up, sort of like Joe Frazier; and Apollo Creed was the charismatic showman who jabs with words, sort of like Muhammad Ali. Adonis Creed, who lacks a real-world analog, is like an angry teenager with daddy issues. That isn’t all that compelling to me. Rocky is more compelling here, with Sylvester Stallone seeming to say goodbye to the franchise. The same goes for Bianca Taylor (Tessa Thompson), who’s juggling a career and other responsibilities while Adonis goes through his personal crisis. I even found the story of Ivan and Viktor Drago (Dolph Lundgren and Florian Munteanu) more compelling given how much they’ve lost, how strained that father-son relationship is, and maybe even how underwritten their parts were.

I wonder if my disappointment stems from the screenplay, which Stallone co-wrote. I mentioned above that this feels like Rocky is leaving the franchise for good, and balancing the progression of Adonis’s character with the exit of Rocky Balboa is a difficult task, especially with how much plot is in the film. Without Ryan Coogler as director, Creed II doesn’t feel quite as large as it could be. The fights aren’t as well done, the drama not as high-stakes, and while there are some moving emotional highs, there are plenty of lulls. Creed II is a by-the-numbers sequel that goes the distance, never hitting quite as hard as I hoped despite some great ideas to work with.