Blockchains are boring now. It’s been ten years since Bitcoin launched, and cryptocurrencies have almost exclusively been used to recapitulate existing monetary systems in slightly new forms. This is boring. Programmable currencies give us the ability to build whole new categories of economies, ones which reject all traditional assumptions about how value is generated, transferred, or stored. It’s past time to start experimenting with such systems.

Putting my reputation where my mouth is, your (not-so-)humble correspondent has done just that. Specifically, I have created, and open-sourced, an experimental, blockchain-based, non-monetary economy, one which quantifies reputation as a spendable currency within a gift economy.

Not that I’m opposed to capitalism. (A surprisingly controversial stance, in the Bay Area where I live.) It’s great up to a point. But there’s no reason to think that it’s the final system forever, the end of all economic history, until the heat death of the universe. Blockchains give us the first real opportunity to experiment with, and the first technological substrate for, new kinds of scalable, quantified, post-capitalist economies … but nobody seems to even be trying.

And so, without further ado, I give you the YKarma Manifesto. (Every weird idea needs a good manifesto.) The basic concept: to model reputation as a spendable currency, every person in a community or organization is allotted “karma coins” to distribute each week. These must be given away to other people before they can be used. The recipients can then spend these coins on various rewards — a day off, a conference ticket, a coffee with someone notable, etc etc etc.

(Please note: this is a reputation economy, i.e. modeling reputation as a private spendable currency, not, repeat not, a reputation system, i.e. some kind of “social credit rating” like China’s. The former is an interesting idea worthy of experimentation. The latter is a dystopia waiting to happen. The two are very different.)

If I sound like I’m being too harsh on the blockchain status quo — well, remember last year, when the cryptocurrency hype was at a peak, along with the aspirational excitement? Blockchains were going to change everything, remake whole economies, restructure the Internet, replace VC with ICOs, seize power from the megacorporations and return it to the people.

That was then. Now blockchains have settled on exactly one killer application: a worldwide unregulated permissionless trading market for penny stocks cryptocurrencies, which I call the “crypto casino.” Oh, they’re occasionally used for transferring money, and for the odd prediction market or digital collectible, and if Bitcoin’s value ever stabilized it would make for a pretty good store of value and hedge against inflation–

— but let’s not kid ourselves. Take a hard look at how people actually use blockchains today, and you can’t help but conclude that basically all we have built is a casino … one which really has only one game.

It’s a casino with some extremely interesting tensions, such as permissionlessness and privacy vs. KYC and AML. It’s a casino whose chips are inherently anti-authoritarian, which is no small thing. It’s a casino which may grow into a full-fledged market for e.g. security tokens. But even then, it’s still just fintech.

True, there are a lot of really interesting meta-projects devoted to new kinds of blockchains (and other decentralized consensus systems), and pan-chain efforts such as Cosmos and Polkadot, and second-layer initiatives such as Lightning, and scaling, and privacy, and decentralized storage/chat/identity, and so on and so forth. There are my two favorites, Blockstack and FOAM.

But most of those, and all of those meta-projects, only matter to people already in the space. To ordinary people, these kinds of initiatives remain as utterly meaningless and eye-rollingly irrelevant as, say, Linux’s systemd wars are to Windows and Mac users.

If that piques any of your interest, go take a look at YKarma. (It seems strangely appropriate for me to make use of the social, and arguably cultural, capital of my position as a Rare Norm columnist to exhort you to do so.) What I most hope for is not that you start using it; it’s that you fork it, use it as a basis for building your own new avant-garde post-capitalist economic experiment, and help make blockchains weird again. 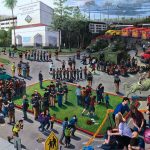